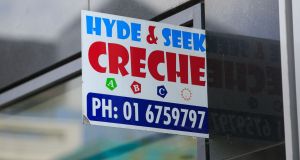 The parents of more than 20 children enrolled in Hyde & Seek creches are seeking to take legal action against the childcare provider, following controversy over practices at the Dublin chain.

Dave Coleman, partner at Coleman Legal, said the Dublin-based firm has been instructed to represent more than 20 families over the past week, following an RTÉ Investigates exposé on the company.

Mr Coleman said he expected the number of clients to increase further, with several meetings between the firm and other groups of parents scheduled to take place this week.

The legal firm previously represented a number of families who took cases against Links Childcare, following an undercover RTÉ Prime Time programme in 2013, which revealed mistreatment of children in that creche provider.

Meanwhile, Early Childhood Ireland has called on the Department of Children and Youth Affairs to immediately establish a team of childcare specialists to investigate the failings identified at the Hyde & Seek creches and ensure “substantial changes” are made.

A statement from the group said the proposed team should comprise staff from Tusla, the child and family agency, Pobal, Better Start agencies and country childcare communities.

It argued that one person stepping back, along with a review, was not enough for the families involved or staff who had been trying to address the failings internally.

Frances Byrne, director of policy with Early Childcare Ireland, said many members had expressed “enormous anguish” since the documentary was aired. She said the organisation “strongly believe that this is the exception to what happens in creches around Ireland”, but was “hugely distressing”.

The group also called on the Government to introduce a dedicated statutory agency for the early years sector, saying a “one-stop shop approach” would end the fragmentation of the oversight of the sector and deliver streamlined planning, funding, administration, inspections and quality. Such an agency would also bring in changes, as proposed under the State’s First 5 strategy, to enable greater parental involvement in early years settings, it said.

A “real time” database of centres with links to inspection reports and other relevant information, as referenced by the Government in its strategy for babies, young children and their families which launched late last year, is also essential, said the group.

“We urge the Government to fast-track the establishment of an early years agency in the interests of babies, children, parents, the wider public and a professional early years sector which is fully supportive of a modernised, fit-for-purpose system,” said Ms Byrne.