The troubled history of the Eighth Amendment

May 25, 2018 | In 1983, the Eighth Amendment was added to Ireland's constitution, banning abortion. Today, 35 years on, voters decide to retain or repeal. Video: Kathleen Harris 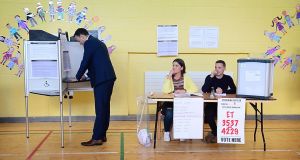 Taoiseach Leo Varadkar casts his vote at Scoil Thomas, Castlenock Dublin, as the country goes to the polls to vote in the referendum on the Eighth Amendment of the Irish Constitution. Photograph: Bryan O’Brien

The Irish people are going to the polls today to decide the future of the Eighth Amendment of our Constitution.

The issue has divided Irish society for decades in what has been an often bitter, hostile and aggressive debate.

The ban on abortion was placed in the Constitution in 1983 in a preemptive move to prevent Irish women having abortions. However, it became clear over time the Eighth Amendment did not stop Irish women accessing terminations either by travelling to the UK or taking abortion pills.

Today, the electorate will decide whether Article 40.3.3 should remain part of our Constitution.

In this video documentary, The Irish Times examines the Eighth Amendment’s history, its effect and its future.