One of the most ‘liberal abortion regimes’ if vote passes 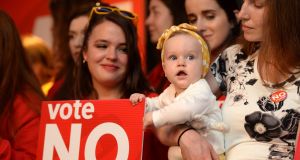 Ireland will have one of the most liberal abortion regimes in Europe if Friday’s referendum is passed, the No campaign warned during its final press conference on Wednesday.

With the broadcasting ban set to come into force on the eve of the referendum on Thursday, the Save the 8th campaign insisted the public would not support a proposal which allows abortion up to six months.

“Under the proposal, you can have an abortion for any reason at all in the first 12 weeks of a baby’s life. You can then have an abortion on undefined mental health grounds right up to six months,” said Niamh Uí Bhriain, a spokeswoman for Save the 8th.

“There is no need to speculate about what the Government might bring in. It’s written in the Bill in black and white. It’s an incredibly liberal bill.”

She said when journalists have taken the time to examine abortion regimes across Europe, they have confirmed that the proposals to be voted on would make Ireland one of the most liberal in the EU.

“There’s no need for speculation on this. It’s in the Bill. It’s what [Minister for Health] Simon Harris wants . . . He is using the hard cases . . . in order to push through abortion on demand.

“The media has allowed him to do that. All of your focus has been on the hard cases and carrying the Yes campaign’s denial of the fact that this is a very liberal abortion proposal.”

She was speaking at a press conference which featured about 20 young women dressed in red T-shirts, carrying placards stating: “Vote no to abortion on demand.”

Voting is set to get under way on Friday over whether to repeal the Eighth Amendment to the Constitution, which bans abortion in almost all circumstances.

John McGuirk, a spokesman for Save the 8th, said there was a contradiction at the heart of the Yes campaign’s insistence that Ireland will not have a liberal abortion regime if the referendum is passed.

He said Minister for Health Simon Harris insisted during Tuesday night’s Prime Time debate that Ireland would come into line with 21 of 24 European countries.

“The Minister, on the one hand, was saying we will not follow Britain’s abortion regime, but on the other saying it would bring us into line with 21 of 24 European countries – one of which is the UK.

“And then he says the proposal isn’t liberal? He is saying it outright . . . this is a very extreme proposal.”

Abigail Malone told the press conference that Mr Harris had insisted that plans to introduce abortion would help women.

However, she said if he got his way the country would have “abortion clinics before it has properly funded rape crisis centres. If Simon [Harris] gets his way, pregnant women will have the right to take an innocent life, but not the right to a roof over their heads.”