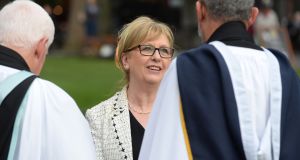 “I do remember, at the time of our own problems with the Ryan and Murphy reports in particular, that there was a suggestion from a very senior cleric in Ireland that the Irish bishops might consider something like that,” she said in Dublin on Saturday. “It didn’t happen. I don’t really know if it was discussed.”

Ms McAleese was speaking in the context of the mass resignation by Chile’s 34 Catholic bishops last Friday after they were summoned to Rome to meet Pope Francis in connection with cover-up of clerical child sexual abuse in that country.

In a similar context, Ireland’s Catholic bishops were summoned to Rome in February 2010 to meet Pope Benedict XVI.

That followed publication in May 2009 of the Ryan report, which investigated abuses of children in orphanages, reformatories and industrial schools, and of the Murphy report in November 2009, which investigated the handling of clerical child sex abuse allegations in Dublin’s Catholic archdiocese.

Ms McAleese said the Chilean bishops’ resignation seemed to her “a huge acceptance of responsibility even from those who might not have been directly implicated in the story itself or in the narrative that led to this...”.

She said it was “an interesting development” this “acceptance that maybe the right thing to do is to put your hands up, run up the white flag and say ‘we are all responsible’. We had a bishop who did that here and indeed has gained himself huge respect in so doing.”

This was a reference to former Bishop of Kildare and Leighlin Jim Moriarty, who resigned in 2009 following the publication of the Murphy report because he had been “part of the governance of the [Dublin] archdiocese” and “should have challenged the prevailing culture”.

As to whether the Irish bishops should have resigned then, Ms McAleese said: “I don’t know. It wasn’t really within contemplation at the time.” Now that it has been done she felt “that it is a potential clearing of the decks and it’s a signalling of what I might call in another circumstance ‘corporate responsibility’”.

Acceptance of such responsibility was “a very, very important development” in the church, she said.

“I think the Chilean bishops must have looked at a pope coming to Chile after all we’ve been through, after all the reports, including what was going on in Australia with the royal commission.”

He had been either “badly advised or chosen a particular side of advice” and, after five years as a popular pope, “made a blunder that really stands as a blemish, a big blemish on his papacy, that he had to apologise for publicly”. She felt “this grand gesture by the bishops, it grabs all that, it mops all that up and it’s a response to how big the story really is.”

She suspected “that for many of them, as probably with us here, there is something isn’t there about the person who takes responsibility, puts their hands up and says: “Even if I wasn’t entirely complicit, I was part of the culture and so let me clear the space to make way for a fresh new culture.

“So I imagine that people would want that expression of their desire for resignation to be honoured. But it’s a matter for the pope, of course.”