The Orange Order in Dublin is making a comeback. Last week they hosted an exhibition in connection with the Easter Rising. Worshipful master Chris Thackaberry confronts some of the stereotypes about the order. Video: Ronan McGreevy 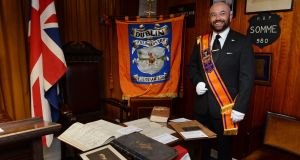 One of the leading members of the Orange Order in the Republic has dissented from a call to voters in today’s abortion referendum to vote No, saying that he will be voting Yes.

Chris Thackaberry, the past master of the Dublin & Wicklow Loyal Orange Lodge (LOL) was on the central committee of the Grand Orange Lodge of Ireland for four years up to 2017.

The Grand Orange Lodge of Ireland has 30,000 members on the island - the vast majority live in Northern Ireland, but 700 are spread between the southern border counties and Dublin.

Mr Thackaberry, who comes from the north Dublin inner-city, posted on the Facebook page of the lodge: “As an Irish liberal Protestant who was born and bred in Dublin city, I have worked and lived in the Irish State for most of my life.

“On the Protestant principle of freedom of conscience I will be voting YES in the referendum on repeal the 8th amendment to the Irish Constitution. I call on my fellow Orange brethren living and working and building relations in the Republic of Ireland who know the State they were born into to vote with their good Protestant liberal conscience on Friday 25th May.”

On Thursday, a Grand Orange Lodge of Ireland statement recommended “all those voting on this sensitive issue reflect on what abortion is and read what God says about the sanctity of human life”.

It said: “As we approach the referendum on the repeal of the Eighth Amendment on the Constitution of the Republic of Ireland we call upon our members, supporters and friends - eligible to exercise their democratic right - to vote No.

“The government has made it clear, if the Eighth Amendment is repealed, it intends to introduce new legislation, including permitting unrestricted abortion during the first 12 weeks of pregnancy.

“The Bible is clear: Children are a heritage from the Lord, the fruit of the womb a reward. Psalm 127:3.”

Mr Thackaberry said he had received a lot of criticism on Facebook for his comments, but he said most of the comments were from Orange brethren in the North.

He said the 700 members that the Orange Order has in the Republic have a better understanding of the social landscape in which the vote is taking place.

He stressed that his views are his own personal opinion and based on his understanding of scripture.

“The Orange institution should not have any say in the matter. It is a matter of individual conscience. That has been the traditional view of most Protestants in the Republic when coming to any question around the constitution,” he said.

“A religious organisation can have a view on this issue, but, as for directing people on how to vote, I would say certainly not. As a Protestant this is completely wrong. We are guided by our conscience.”

Mr Thackaberry said Unionists cannot complain about the Republic’s interference in the affairs of Northern Ireland and then seek to influence a vote in the Republic. “It’s the height of hypocrisy,” he said.

Meanwhile, the Northern Ireland section of Amnesty International has said, regardless of the outcome of the vote in the Republic, women and girls in the North “will still be restricted by some of the most suffocating abortion laws in the world, which also carry the harshest criminal penalties in Europe”.

Amnesty campaigns manager Grainne Teggart said: “Many people in Northern Ireland have campaigned with our southern sisters and friends.

“We have everything crossed in hope that Friday’s vote will be a Yes for equality and respect.

“It’s also important that we acknowledge that not all women on the island have this chance for change. It’s vital that no woman on the island of Ireland is left behind.

“We cannot continue with a situation that treats women in Northern Ireland as second-class citizens.”