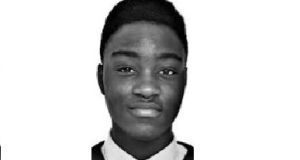 Co Offaly resident Nonso Muojeke (14) came to Ireland with his mother and older brother in 2006.

Minister for Justice Charlie Flanagan is being urged to revoke a deportation order against a Nigerian teenager who has been living in Ireland since he was two years old.

Politicians, artists and educators have backed a petition opposing the deportation of Co Offaly resident Nonso Muojeke (14) to a country where he doesn’t speak the language.

Street artist Joe Caslin, who plans to feature the teenager in a Dublin street mural shortly, confronted Mr Flanagan on the issue in Tullamore on Sunday where the Minister was canvassing on the abortion referendum.

Mr Flanagansaid he had received representations but did not comment on individual cases.

The teenager moved to Ireland with his mother and older brother Victor after his father died in 2006. The family fled Nigeria, where Nonso’s mother had been ill treated, but their application for asylum was declined in 2009.

Despite this decision, the family continued to engage with the State through solicitors and are seeking to have a deportation order overturned. Their case is coming before the courts again next month.

Offaly North Tipperary TD Barry Cowen is backing the anti-deportation petition, saying the children were Irish citizens in all but name.

“You would assume the Government or relevant Department would look at the case for amnesty where the family are so immersed in Irish society,” the TD said.

Mr Caslin, who teaches art at Tullamore College, urged Mr Flanagan to intervene, saying “he has absolute power as to whether he allows this family to stay or not”.