Abortion referendum: Turnout hits 70% in some areas as polls close 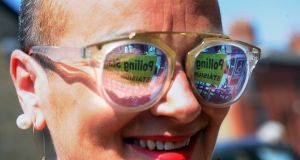 A woman outside a polling station in Dublin as the country heads to the polls for the Eighth Amendment referendum. Photograph: Aidan Crawley/EPA 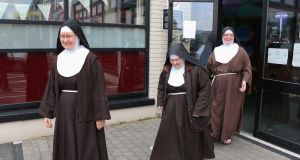 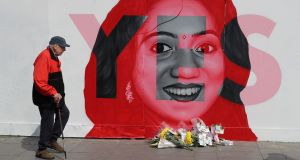 People pass a mural of Savita Halappanavar in Dublin, as polls open for the referendum on the Eighth Amendment. Photograph: Niall Carson/PA Wire 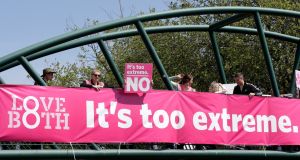 Campaigners hold up banners to persuade voters in Dublin to retain the Eighth Amendment as polls open in the referendum on the issue. Photograph: Max Rossi/Reuters

Reports from polling stations indicate a strong turnout rate as voting concludes in the abortion referendum in which 3.3 million citizens are registered to vote.

Turnout was up to 70 per cent in some areas.

You can follow our live coverage of the abortion referendum here

Figures from a number of polling stations show a stronger turnout than during the marriage equality referendum.

Analysts say a high turnout, particularly in urban areas, is likely to favour a Yes vote.

Polls opened at 7am in this referendum, which asks if people want to repeal the Eighth Amendment, which gives equal right to life to the mother and the unborn child and was inserted into the Constitution in a referendum in 1983.

A Yes vote would pave the way for laws legalising abortion up to 12 weeks into a pregnancy, and in more limited circumstances thereafter.

The Government has pledged to pass such legislation by the end of the year if the proposal is carried. There will be no change in the law in the event of a No vote.

Polling stations were open until 10pm. The counting of votes is scheduled to start at 9am on Saturday.

However, Inishbofin, with a population of just under 200, reported a 72 per cent turnout.

Speaking to reporters, including a significant number of journalists from overseas, outside his local polling station in Castleknock, Taoiseach Leo Varadkar said it was “a big Yes from me”.

“Not taking anything for granted of course, but quietly confident — there’s been good turnout across the country so far and hoping for a Yes vote tomorrow,” he added.

President Michael D Higgins cast his vote in the referendum alongside his wife Sabina early on Friday.

Meanwhile, anti-abortion politician Peadar Tóibín called for Irish people to vote No to “abortion on demand”.

The Sinn Féin TD, who is at odds with his party on this issue, posted on Twitter: “The irony that the referendum on abortion is being held on International Missing Children’s Day will not be lost on many Irish people. Those on the margins of society suffer most from abortion.”

Labour Party leader Brendan Howlin tweeted that he had voted to repeal the Eighth Amendment.

Higher than usual turnout had been reported across Dublin constituencies by lunchtime, but there was a slowdown during the afternoon.

However, the turnout in Dublin county was more than 70 per cent on Friday night, according to Dublin county returning officer Fergus Gallagher.

The turnout in Dublin city was close to 65 per cent at 9.15 pm, Dublin city returning officer James Barry said.

In some areas of the city turnout was almost double what it was for the general election in 2016 after five hours of voting.

In Dublin Bay South, a queue was reported outside Scoil Mhuire, Lakelands, in Sandymount before polling started at 7am.

In Dublin Central, some polling stations reported steady but not spectacular turnout, with city centre stations showing 15 per cent to 20 per cent turnout by noon.

Dublin North-West posted higher than normal turnout. In Glasnevin, turnout was 22.2 per cent by lunchtime, higher than usual.

In Laytown/Bettystown in Co Meath, turnout was at about 55 per cent by 8pm, with one ballot box in Laytown running at 78 per cent, according to a tweet by Labour’s Ged Nash.

Voting was brisk in Co Wexford, with early indications in some areas of a higher turnout than that for the Eighth Amendment referendum of 1983.

It was predicted that some parts ofWexford town could hit up to 68 per cent by 10pm.

In Co Louth turnout in the morning was up when compared with the same time during the last referendum, according to the returning officer.

The highest turnouts in the county were Sandpit and Monasterboice, both at 70 per cent, while Tinure saw a turnout of 66 per cent.

Voting in Carlow town this morning averaged 12 per cent, with one polling station in the town reporting that a more mature electorate had come out to do so.

By 7pm in the Stephen Street polling station in Kilkenny city, 50 per cent of the electorate had cast their vote.

The latest figures from Co Laois showed a turnout of just in excess of 50 per cent in each of Abbeyleix’s three ballot boxes and 51.2 per cent in Rosenallis.

An unusually large number of young people is said to be casting their votes in the county.

In Co Longford, turnout at Longford town was at just in excess of 50 per cent at 8.10pm. Killoe and Mullinalaghta were both at 50 per cent.

Granard town was averaging a few percentage points further back at 43 per cent.

Earlier in the day, turnout levels were said to be lower in more rural areas of the county.

Reports from several parts of Co Tipperary showed turnout to be steady, with the highest turnout appearing to be in the largest town, Clonmel,

Returning officers in Nenagh earlier said turnout was higher than normal for a referendum.

In Co Kerry, turnout was high, but there was no late surge. By 8.35pm about 50 per cent had turned out, with voting in Tralee and Killarney at between 45 and 50 per cent.

County registrar Pádraig Burke said some booths had noticed a surge of women and younger men. Older male voters were not out in the same numbers.

In Cork, turnout appears to be up on both the marriage equality referendum and the last general election.

In Blackpool in Cork North-Central, polling was close to 50 per cent at 7pm, which is approximately 10 points higher than the vote in the marriage equality referendum at the same time.

In nearby Mayfield, polling was running at about 51 per cent at the same time, which again was higher than the equivalent vote during the 2015 referendum. Experts were predicting the poll there would easily surpass the 60 per cent mark.

In Carrigaline, home to Tánaiste Simon Coveney, polling was running at 50 per cent at 7pm.

The Cork County Sheriff said that as of 8pm voter turnout in Cork County was at 51.76 per cent.

Meanwhile, many areas in Co Waterford have reported high turnouts, with some experiencing higher than normal numbers. As voting came to a close, polling centres in Waterford city reported a turnout in excess of 50 per cent, while the percentage was similar in the county.

Among the centres with the highest turnouts in the city was St John of God National School at 70 per cent. while St John’s College Conference Centre had a turnout of 68 per cent before 9pm. Dungarvan stood at 55 per cent and Tramore at 54 per cent at some centres.

Voting in Galway city was brisk this morning but the turnout in rural areas across the county was lower.

Among the first voters in the city were nuns from the Poor Clare sisters, who cast their vote at Scoil Chroí Íosa on Presentation Road.

The sisters, while still an enclosed community, had posted a video on their website urging a No vote that had received 14,764 likes by noon on voting day.

The early morning rush in the city slowed to a trickle by mid-morning, with an estimated turnout of 20 per cent.

In places like Lackagh, there was only a trickle of voters early this morning.

Voting was said to be exceptionally brisk in Co Sligo, a trend that was evident in both rural and urban areas. Turnout had reached 60 per cent in a number of Sligo polling stations before 8.30pm, although the expected “tea-time rush” failed to materialise in some areas .

On the Strandhill Road in Sligo town, turnout had reached 60 per cent by 8pm at one polling booth – staff there said they had never seen such a high figure so early for any referendum or election.

At Cranmore in Sligo town by 8pm turnout was averaging 54 per cent at two polling booths, with staff there predicting at least 60 per cent by close of polls.

In Tubbercurry, the talking point was the huge turnout of elderly voters, with many arriving on walking aids and canes. Turnout in the area was earlier described as considerably higher than in previous elections.

In other parts of Co Sligo, however, staff commented on the large numbers of first-time voters.

In Strandhill, where 63 per cent had voted in one booth by 8pm, staff had noted that a lot of voters were arriving in school uniforms.

A young age profile was also evident on the Mail Coach Road in Sligo town, where a half dozen voters had waited for staff to open up at 7am.

Presiding officers said that if trends continued turnout by the end of the day would be higher than for the marriage equality referendum.

Meanwhile, turnout in Roscommon was at 51 per cent by 8.30pm. The highest turnout for the county at that time was in Athlone, which was running at 60 per cent. Castlerea was running at 46.34 per cent.

Co Cavan was heading for one of its highest referendum turnouts in recent history, according to reports.

By 8.30pm on Friday, turnouts in both counties Cavan and Monaghan were reaching high levels, with Co Cavan expected to hit more than 60 per cent by close of polling and Co Monaghan reaching into the 50 per cent margin.

At the Aughadreena National School polling station outside Cavan town, a clerk handing out ballots said the turnout “is up on any referendum I have ever worked before. It’s exceeding the marriage equality referendum.”

Immunity to Covid-19 could be lost in months, study suggests 15:12
Attempted gun attack on man in his 20s in Co Derry village 14:44
Twelfth at Home begins with service at Belfast City Hall cenotaph 14:25
Number receiving coronavirus unemployment payment falls by 67,000 13:52
Father and daughter missing for 10 days found safe and well 13:34