Taoiseach Leo Varadkar says he is "quietly confident" of a Yes result as he casts his vote on the abortion referendum in Castleknock, Dublin. Video: Bryan O'Brien 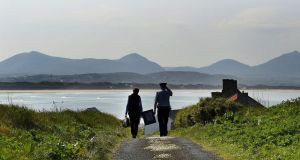 The polls have opened today in a long-anticipated referendum on whether to remove the State’s constitutional ban on abortion.

After a lengthy and sometimes divisive campaign, the outcome of the vote on the future of the Eighth Amendment, which guarantees an equal right to life to the mother and the unborn, will be closely followed in Ireland and abroad.

A Yes vote would pave the way for laws legalising abortion up to 12 weeks into a pregnancy, and in more limited circumstances thereafter.

The Government has pledged to pass legislation by the end of the year if the proposal is carried and to accept there can be no change in the law in the event of a No vote.

More than 3.2 million people are eligible to vote, with polling stations open from 7am until 10pm. The counting of votes is scheduled to start at 9am on Saturday. Voters in 12 offshore communities cast their ballots on Thursday.

Opinion polls suggest a Yes vote is likely but with turnout unpredictable, those campaigning to repeal the amendment have asked their supporters to avoid any complacency as to the outcome. No campaigners insisted that a late turnaround is still on the cards if their supporters come out in strength.

Both sides issued their final appeals to voters on Thursday in advance of the 2pm broadcast moratorium, though intensive canvassing and online campaigning continued overnight.

Taoiseach Leo Varadkar said there would not be a second chance to vote on the issue of abortion for a “long time”. He said a No vote would send out the wrong message not just to women, but about Irish society.

He said that “women have had to travel, sometimes in secret, to other jurisdictions to end their pregnancies and I hope that a Yes vote would end that stigma and help to take away that legacy of shame that exists in our society”.

The No campaign called the proposed legislation “the most far-reaching abortion laws any Irish government has ever proposed in the history of the State”.

Barrister Benedict Ó Floinn warned that repealing the Eighth Amendment “goes far beyond dealing with limited difficult cases” and that the only way “to prevent the adoption of an extreme abortion law is to vote No”.

A number of Fianna Fáil TDs including Mary Butler, Éamon Ó Cuív and Declan Breathnach said that, should there be a Yes vote, they will not support the legislation allowing for access to terminations up to 12 weeks. Mr Breathnach said he would consider tabling amendments to allow for terminations in cases of rape, incest and fatal foetal abnormalities.

Mr Varadkar said he hopes and trusts that the vast majority of TDs will respect the will of the Irish people if it is a Yes vote.

Minister for Local Government Eoghan Murphy said he was “worried” that No campaigners may try to “undermine the integrity” of the vote with allegations of irregularities. Independent TD Mattie McGrath, who opposes repealing the amendment, on Thursday repeated claims about irregularities in the registration of some voters.