Summerhill house occupation: Who is involved and why did it happen?

Q+A on the groups involved in occupying the north Dublin property, and who the owner is

A group of protesters who were occupying a house in Dublin's north inner city have vacated the property. A High Court ruling ordered that the protesters had to vacate by 8am on Friday August 17th. Video: Jack Power 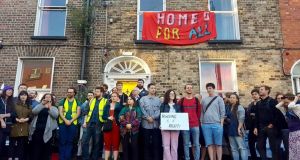 On Thursday a High Court judge ordered a group of protesters occupying a property in north inner city Dublin to vacate the building by 8am on Friday, August 17th.

The activists broke into the house, 35 Summerhill Parade, Ballybough, Dublin 1, last Tuesday (August 7th) and took up occupation in the building. The property is owned by a staff benefit fund for the construction machinery supply firm Pat O’Donnell & Co.

On Friday morning, a man who identified himself as an agent for the plaintiff arrived at the premises shortly after 9am. After knocking on the door and asking if anyone was present inside the property, no one answered. Following that, a drill was used to break open the lock on the front door and he entered the property. The man confirmed “the properties we have inspected are not occupied.”

Why was the house occupied?

In early May, a large number of primarily Brazilian tenants were evicted with 24 hours notice from the house, along with five other neighbouring homes on the street owned by the fund. Up to 20 tenants had been living in each property, sharing rooms in cramped bunk bed accommodation. Tenants who spoke to The Irish Times in May did not know the name of their landlord, or who owned the properties.

Housing groups involved in the occupation had supported the tenants on the night they were told they would need to move out.

The owners of the properties had rented the houses to several landlords, who had then sublet them to the foreign national tenants. In May, inspectors from Dublin Fire Brigade raised fire safety concerns with conditions in the properties, and the owner agreed to vacate the buildings.

Who were the occupiers?

The coalition of protestors was made up of several left wing housing campaign groups, including Dublin Central Housing Action, Take Back Trinity, Dublin Renters’ Union, and Dublin West Housing Action.

Dublin Central Housing Action was one of the main groups behind the protest, the voluntary group has been involved in previous protests targeting landlords.

In January they supported tenants in a dispute with Paul Howard, the Dublin businessman and landlord of several apartments on Mountjoy Square. Tenants were involved in a dispute with Mr Howard over eviction notices they were served, after refusing to pay rent increases above the annual four per cent rate, allowed under rent pressure zone caps.

Several activists involved in the occupation were from the student group Take Back Trinity. Earlier this year the group occupied the Dining Hall building in Trinity College Dublin to protest a proposed increase in repeat exam fees to €450, which the university reversed following the protest.

Who owns the building?

Seven properties on the street, 33-39 Summerhill Parade, are owned by Pat O’Donnell & Co Ltd Retirement and Death Benefit Plan, all of which have been vacant since May over fire safety concerns.

PJ O’Donnell is a trustee of the staff pension fund, which has 67 members, including 18 pensioners. Pat O’Donnell & Co is a plant machinery supply firm, and its head office is based in Chapelizod, Dublin. The company are long time sponsors of Clare GAA.

Pat O’Donnell (78), with an address in Castleknock, his wife Marleen (75), and his son PJ O’Donnell (38) are the company directors, according to their latest financial accounts.

Last week a spokeswoman for the company had denied any of the three individuals were owners of the Summerhill property, following queries from The Irish Times.

Number 35 Summerhill Parade was purchased in December 2016 for €360,000, according to the Property Price Register. The owners’ lawyers told the High Court the row of properties were purchased from Des Kelly Carpets Ltd.

Des Kelly Carpets Ltd had owned 35 Summerhill Parade since 1998, according to documents from the registry of deeds.

For three months Dublin Central Housing Action alleged on social media that Pat O’Donnell & Co were the owners of the houses. This link was confirmed after PJ O’Donnell took legal action against the occupants on behalf of the staff pension fund this week.