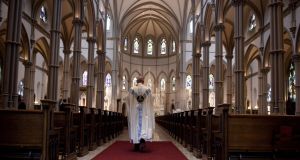 Father Kris Stubna walks to the sanctuary following a mass to celebrate the Assumption of the Blessed Virgin Mary at St Paul Cathedral, in Pittsburgh, Pennsylvania. Photograph: Jeff Swensen/Getty Images

It would be “negligent and unacceptable” for Pope Francis not to respond to the abuse issue while in Ireland, a survey of Irish Catholics has found. Conducted last month by the Association of Catholic Priests (ACP) at four regional venues across the State, it was one of its main findings .

“There is a desperate need for Rome to genuinely face up to and acknowledge the horror of the Catholic Church’s blindness to and mismanagement of the perpetrators of sexual abuse,” it concluded.

Dealings at “the Mother and Baby homes and adoption in this country should be disclosed fully in a truthful and fully open manner by the Church, respondents said, while the failings of the Catholic Church should be acknowledged” at all levels, most especially with regard to sexual and physical abuse.”

The ‘on the spot’ survey was conducted in in Mallow Co Cork, Tuam Co Galway, Drumcondra in Dublin, and Cavan town to establish ‘What do we need to say to Pope Francis about the Irish Church?’ People were also invited to make submissions to the ACP website before Thursday of last week, August 9th.

Altogether l,396 participants contributed 2,288 submissions, with 2,088 submissions (or 78 per cent of respondents) proposing radical reform under a number of headings.

Top of the survey priorities were calls for an equal role for women in the Church, followed by priesthood and vocations, reform in Church governance and worship. Next was dealing with the abuse issue and its fall-out, followed by LGBT issues,then young people and the church.

The role of women was seen as “ the first and most important issue to be dealt with. Respondents said “the current culture of misogyny needs to be recognised and erased.”

The survey concluded that “the Catholic Church in Ireland is going to disappear unless Rome allows priests to marry and lifts the mandatory ban on the ordination of women to priesthood and diaconate. Firstly, married priests and, secondly, women priests.”

Where church governance was concerned respondents said “leadership will have to come from Catholics in the pews for the Church to be able to speak with authority to the lives people lead today.” They also felt “the Church’s teaching on artificial contraception is ignored by the vast majority of Catholics.”

Humanae Vitae (encyclical banning artificial means of contraception) is described by respondents as an “unwanted intrusion into the personal lives of Catholics.”

Where all aspects of abuse by Church personnel was concerned, repondents said “full disclosures should be made and apologies given.”

There was “huge support” for the situation of LGBT people in the Church “to be respectfully addressed, particularly but not exclusively among younger respondents. The Church’s traditional belief that LGBT people were flawed was regarded by respondents as disrespectful and unacceptable.”

Respondents also agreed that “the selection process for the appointment of bishops needs to be reviewed.We need leaders who are chosen not because of their perceived orthodoxy but rather because of their leadership qualities.”

Other issues important to respondents (200 submissions or 22 per cent of respondents) included Pope Francis’s 2015 encyclical on the environment Laudato Si’, ‘silenced’ priests, family life, and the need to return to traditional devotions.