Vatican expresses ‘shame and sorrow’ for sex abuse by clergy

More than 1,000 children in six dioceses molested by priests

The Vatican, in its first response to a damning report by a US grand jury on sexual abuse of children by priests in Pennsylvania, on has expressed "shame and sorrow". Pictures: Reuters 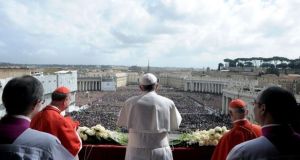 The Vatican has expressed “shame and sorrow” for sex abuse by priests in its first response to a US grand jury report published last Tuesday.

The Pennsylvania grand jury found that more than 1,000 children in six dioceses there had been molested by 300 Catholic priests over the past 70 years while senior church officials took steps to cover it up. The grand jury said it believed the “real number” of abused children there might be “in the thousands”.

The Catholic Church “must learn hard lessons from its past”, said Vatican spokesman Greg Burke on Thursday night. He pledged that the church would hold abusers to account. He also stressed the “need to comply” with civil law, including mandatory reporting of abuse against minors.

Pope Francis, he said, understood how “these crimes can shake the faith and spirit of believers” and he vowed that the Church would “root out this tragic horror”. The pope will visit Ireland next week for the World Meeting of Families (WMoF) in Dublin.

The grand jury report was particularly critical of a US Cardinal who is to take part in the WMoF. It faults Cardinal Donald Wuerl, a former bishop of Pittsburgh and now Archbishop of Washington, for what it said was his role in the concealment of sex abuse.

Cardinal Wuerl, who is scheduled to address the WMoF next Wednesday on “The Welfare of the Family is Decisive for the Future of the World”, said in response that while in Pittsburgh he had “acted with diligence, with concern for the victims and to prevent future acts of abuse”.

Meanwhile president of the US Catholic Bishops Conference has said they will invite the Vatican to conduct an apostolic visitation to lead a “full investigation” into questions still surrounding revelations of sex abuse by former Cardinal Archbishop of Washington Theodore McCarrick.

Cardinal Daniel DiNardo said the US bishops would also take steps to create channels for easier reporting of abuse and misconduct by bishops. It followed the recent emergence of credible allegations of sexual abuse of seminarians and young adults by Archbishop McCarrick (88) and which has led to his resignation from the College of Cardinals last month.

Cardinal DiNardo said the US bishops’ conference executive committee has met several times recently to address what he called “a moral catastrophe”.

On Wednesday it was announced that Cardinal Archbishop of Boston Sean O’Malley, chairman of the Vatican’s Commission for the Protection of Minors, would not be attending the WMoF in Dublin next week as he deals with abuse allegations at the St John’s seminary in Boston. He was to chair a discussion on child safeguarding at the WMoF next Friday.

A group representing clerical child-sex survivors worldwide has repeated its request that three cardinals be removed from the WMoF programme for next week .

Ending Clerical Abuse, which represents survivors in 15 countries, said the three cardinals – Cardinal Kevin Farrell, prefect at the Vatican’s Dicastery for Laity, Family and Life which has overall responsibility for the WMoF, Cardinal Óscar Maradiaga of Honduras and a member of Pope Francis’s Council of Cardinals, and Cardinal Wuerl should be “investigated, not honoured” for what it claims was their role in covering up for clergy who abused minors. This is denied by all three cardinals.

Pope Francis’s own record on child protection has been described as a “dismal failure” by Ian Elliott, the former chief executive of the Irish Catholic Church’s National Board for Safeguarding Children. Pope Francis, on his visit to Ireland , “needs to come with a mindset that it’s not good enough to simply apologise for what has happened”, said Mr Elliott.