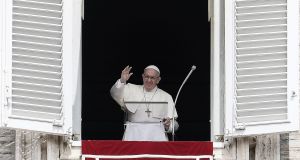 Pope Francis: “It is not about him, it is about the unresolved agony, the anguish that is ongoing and is unaddressed, and cries about to be addressed,” said Fr McCafferty. Photograph: Filippo Monteforte/AFP/Getty Images

A Belfast priest has said Pope Francis should cancel his visit to Ireland because of the issue of clerical sex abuse.

Fr Patrick McCafferty told his west Belfast congregation that “the pope should not come to Ireland”.

“I am going to say something now that will shock you,” said Fr McCafferty at the masses in the Corpus Christi Church where he is the parish priest.

“With two weeks to go to the pope’s brief visit to Ireland, for the World Meeting of Families, I think the pope should cancel his scheduled appearance and stay away from the event,” he said.

The priest, in homilies last Saturday and Sunday, details of which have now emerged, has confirmed to The Irish Times he was referring to three cardinals who are due to take part in the World Meeting of Families in Dublin next week.

He made his call to the pope, he said, in the context of a group representing clerical child sex survivors worldwide who recently wrote an open letter to the Archbishop of Dublin Diarmuid Martin seeking the removal of three cardinals from the World Meeting of Families.

The Ending Clergy Abuse group claimed that the three cardinals – Cardinal Kevin Farrell, prefect at the Vatican’s Dicastery for Laity, Family and Life which has overall responsibility for the World Meeting of Families, Cardinal Óscar Maradiaga of Honduras and a member of Pope Francis’s Council of Cardinals, and Archbishop of Washington Cardinal Donald Wuerl – had covered up for clergy who abused minors.

The cardinals have denied these claims.

Fr McCafferty said he was also asking the pope to cancel his visit in the context of how former US cardinal Theodore McCarrick recently was removed from ministry following accusations that he had sexually abused minors as well as seminarians and young priests.

The actions of predators in the priesthood have been termed ‘soul murder’. The seriousness of their evil actions cannot be overemphasised

As a seminarian in Wexford and later in Northern Ireland, Fr McCafferty was abused by former priest James Donaghy. In 2012 Donaghy was jailed for 10 years for that abuse and also for abusing two altar boys.

Fr McCafferty told his congregation the harm he suffered was extensive and long-lasting. “Others have suffered worse and may never be healed in this life,” he added. “The actions of predators in the priesthood have been termed ‘soul murder’. The seriousness of their evil actions cannot be overemphasised. What they do to innocent children and young people can result in a lifetime of relentless suffering.”

The priest, without naming anyone specifically, also alluded to “those who sang dumb” about the abuse, “and those now lying through their teeth about what they knew. It is an abomination and desecration that will lead certain high-ranking men to the pit of the damned. Yes, they will answer for it in hellfire,” he said.

“I would ask our Holy Father the pope not to come to Ireland,” he added. “I say that as his faithful son, who loves him and who would defend him with my life. I ask the pope not to come on account of the betrayal, the destruction of trust and entire loss of credibility,” he said.

Fr McCafferty added this week that he was a “100 per cent pope man” and trusted him and had every respect for him. “It is not about him, it is about the unresolved agony, the anguish that is ongoing and is unaddressed, and cries about to be addressed.”

He said the response among his Corpus Christi church congregation was “very positive and supportive” and that there were “no dissenting voices”.