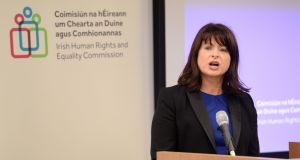 Emily Logan, chief commissioner of the Irish Human Rights and Equality Commission, said it would draw on the ‘diverse experience’ of the seven individuals in the course of its work.

Seven people have been nominated as members of the Irish Human Rights and Equality Commission following a row over the selection process.

The commission announced the nominations in a statement on Tuesday and said they were made following the conclusion of an “open competitive process” run by the Public Appointments Service.

All seven have been nominated for appointment by President Michael D Higgins for a five-year term.

The appointments will see the commission at its full complement of 15 members, and in accordance with the 2014 Irish Human Rights and Equality Commission Act. They also ensure a gender balance with eight women and seven men.

Emily Logan, chief commissioner of the commission, said it would draw on the “diverse experience” of the seven individuals in the course of its work.

Minister for Justice Charlie Flanagan had delayed the announcement pending a legal submission challenging the selection process by Betty Purcell, an outgoing commissioner.

Ms Purcell, a former producer at RTÉ, had been on the commission since 2014 and applied to be reappointed.

She was unsuccessful at interview and said she had been “pushed out” because she had been a “radical thorn in the side” in her approach to such issues as abortion access and the refugee crisis.

A resolution must now be passed by the Oireachtas, after which the appointments will be confirmed by the President.

The commission is an independent statutory agency, accountable to the Oireachtas. It works to promote and protect human rights.

Its remit includes monitoring the human rights impact of Government policies, and supporting groups and individuals asserting their rights.

In the past year, for instance, it has supported Travellers taking discrimination cases and spoken out on the impact of the “baptism barrier” on non-Catholic children’s rights.