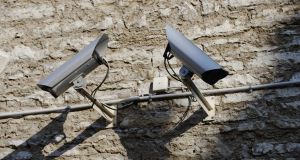 Limerick City and County Council has said it is taking legal advice about aspects of the hi-tech CCTV technology it is rolling out as part of a pilot “smart city” project. Image: Getty

Limerick City and County Council has said it was taking legal advice about aspects of the hi-tech CCTV technology it was rolling out as part of a pilot “smart city” project.

The council, in partnership with An Garda Síochána, is planning to install what it described as an “integrated smart CCTV platform”, which included “tourist cameras” and automatic number plate recognition (ANPR) cameras in 14 towns.

But it has been accused of “piggybacking” additional technologies on top of the cameras that had been authorised by gardaí.

The council says many communities have requested the installation of, or an increase in, the presence of CCTV, “for a better response to local concerns in relation to public order and safety in public places” and to increase community safety. The areas include Rathkeale, Newcastle West, Askeaton, Abbeyfeale, Doon, Fedamore, Caherdavin, Dooradoyle and Kilteely.

Dr Mihai Bilauca, head of digital strategy with the council, told councillors in recent days the rollout of CCTV would go ahead in the 14 towns but in fewer locations than originally planned in order to stay within the budget of €440,000.

Dr Bilauca said the cameras would improve emergency responses to accidents and aid with severe weather incidents. They would also aid traffic management and help to fight illegal dumping and antisocial behaviour.

The council said the pilot CCTV scheme was approved by the local joint policing committee last August and received formal approval from the Garda Commissioner in December.

Limerick was selected in 2016 as a €500,000 national case study for a “smart cities” project, funded by Science Foundation Ireland through the Irish Software Research Centre (Lero) based at the University of Limerick.

The project aims to use the “internet of things” to capture “potentially thousands of sensors and devices from water, soil and air quality, traffic, cycling and pedestrian movement, parking event management and other sources”.

The council said the funding for the smart CCTV scheme was separate to the SFI funding, however. The Department of Housing, Planning and Local Government is providing half, with the rest provided by the council.

Newcastle West resident and solicitor Rossa McMahon said it seemed the council was “piggybacking” additional technologies on top of cameras that had been authorised by the Garda.

Correspondence sent to Mr McMahon by the Garda in relation to concerns he raised about the scheme confirms the Garda Commissioner authorised the scheme on December 11th “for the sole or primary purpose of securing public order and safety in public places by facilitating the deterrence, prevention, detection and prosecution of offences”.

“The cameras authorised under this CCTV scheme do not include an automatic number plate recognition functionality, nor were ‘tourism cameras’ approved in this application,” it states.

The council said privacy and data protection were “paramount in this project”.

An “open and transparent process” had been followed in the development of the pilot project and extensive information and consultation had been undertaken with representatives of local communities and local Garda officers.

A council spokesman said the use of ANPR, footfall and traffic data would be determined “based on legal advice”.

He said it was envisaged that the data provided by such features would help the Garda and also local authority departments responsible for traffic, environmental control and enforcement to make “better/faster decisions when identifying and prosecuting offences” under various legislation.

The council said a smartphone system which would allow people to access data through apps “has not been enabled and it will not be enabled until the appropriate procedures are in place and training provided to its users”.