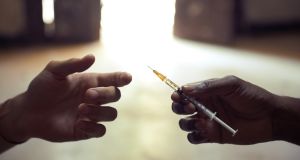 “On a fundamental level people do not feel great sympathy for people who inject drugs.”

Years after beating his heroin addiction, Martin scored in a football match in front of his young son. What should have been a moment of intense pride quickly turned to humiliation as rival teammates began shouting “junkie”.

“The number nine, kick him, kick him, he’s a f**king junkie!” Martin recalls of his treatment on the pitch, the residual stigma apparent in his expression. His son was 11-years-old.

“I had to explain...not go into massive detail, but just say look, daddy made some bad decisions. But I didn’t want to brace that with my son yet. I wanted to wait until he was 15 or 16.”

Martin, who asked not to be identified, is among a number of voices on an audio promo for a campaign addressing negative perceptions of drug addicts.

“Stop the Stigma”, an initiative of the Citywide Drugs Crisis Campaign has been launched on the back of six focus groups examining drug use and society’s often visceral response to it among 70 current and former addicts.

Martin was using heroin at 16 and only finished up with methadone, which followed the heroin use, two decades later.

Another time, he remembers, he was travelling to hospital with his mother who was undergoing cancer treatment when he was again publicly shamed as an addict.

“My ma just balled. I will probably have to carry that for the rest of [MY LIFE],” he says.

“I remember looking at me mam, me mam looking at me kind of saying ‘ah it’s alright’. But it wasn’t. My mam was absolutely broken. Ya, I know stigma. I know it a lot.”

Of particular concern, the campaign emphasises, is the ability of this stigma to stop people seeking out treatment. Efforts to tackle prejudice are seen as key to supporting the new National Drugs Strategy which, at government level, promotes policy that takes addiction away from the criminal justice arena and into healthcare.

The Citywide focus groups found the stigma that surrounded people who use drugs made them feel worthless, depressed, degraded and powerless.

“It drives people into isolation, danger and back into addiction,” explained its co-ordinator Anna Quigley.

Research has confirmed largely negative attitudes toward drug addiction. A Red C poll previously conducted for Citywide found almost two thirds of respondents would be scared by the prospect of living beside someone who uses drugs. Almost 90 per cent believe drug related crime to be a major problem.

One of the reasons for such hostility, explains Charlie Lloyd of the University of York who has conducted research in the area, is a perception that people are responsible for their own problems and do not sit among “blameless” categories of historic stigma, such as those with mental or physical disabilities.

“On a fundamental level people do not feel great sympathy for people who inject drugs, even if they are in pain,” he said, referencing research that compared different categories of people.

Minister of State with responsibility for the National Drugs Strategy Catherine Byrne also addressed the campaign launch and said policy toward those affected by drugs had switched to a “person centred” approach.