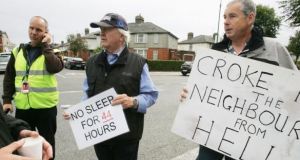 About 150 residents from the Croke Park area met in Dublin on Monday night to discuss whether a fourth concert should be allowed at the stadium this year.

While most opposed the planned concert by veteran rock-stars the Rolling Stones on May 17th, several said they wanted it to go ahead. The meeting was hosted by the Clonliffe and Croke Park Residents Association (CCPRA).

Aiken Promotions announced the concert over the weekend, subject to licence. It would be in addition to two concerts by Taylor Swift in June and a third by Michael Bublé in July.

A fourth would be in apparent contravention of planning conditions, laid down since the debacle over three planned, and then cancelled, concerts by Garth Brooks in 2014.

Eddie Traynor, a local resident, said: “You would think Mr Aiken would have copped on after all the money he lost with the last concert. If we let him away with this we know it will be six concerts next year, eight the next, and ten the next.”

Peter Branagan, secretary of the CCPRA, said the association was not “anti-Croke Park, or anti-GAA” but the agreement it had reached with the GAA had been broken by the sports organisation.

However, Cathy Power said concerts in the area were “positive”. She enjoyed the “buzz and excitement” of people gathering to listen to live music.

“I wonder,” she said, “can people make proposals to change the conditions of the concert instead of saying we just don’t want it.”

Sandra Burke said Croke Park was “one of the best things in the area” which was blighted by “drugs and unemployment”, while the concerts brought in employment and money.

Cllr Nial Ring (Independent)*, said he did not want to “defend the GAA” but “in fairness to them” Croke Park had delivered a “huge amount” to the north-inner city area since 2014.

He said the GAA had donated almost €1 million to local services and groups, that about 30 per cent of people employed in Croke Park were from the local area and that it has contributed €6.5 million to the redevelopment of Croke Villas – a dilapidated block of council flats, which would provide 73 new homes.

He suggested a meeting between Croke Park, Aiken Promotions, the residents and Dublin City Council, which would have to decide whether or not to grant the licence.