Rights group wants protests to be permitted under Covid-19 laws 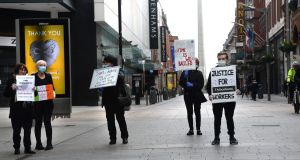 Debenhams workers gathered to protest outside the store on Henry Street, Dublin on Tuesday but were asked to move on by Gardaí. Photograph: Dara Mac Dónaill/The Irish Times

The Government should review the decision to exclude protest from the list of reasonable excuses to leave home during the Covid-19 pandemic, the Irish Council for Civil Liberties (ICCL) has said.

The call comes after a number of protests were dispersed in recent days. Gardaí on Henry Street in Dublin directed a small group of former Debenhams workers to move on after they had gathered for a protest against their treatment by the company on Tuesday.

The ICCL was also critical of “discrepancies” between Garda treatment of protesters in various locations across the State, after gardaí on the ground in some locations took the decision to permit demonstrations to continue while in others they were broken up.

“The right to protest, to voice dissent and dissatisfaction without fear of breaking the law, is a core tenet of a democracy,” she said.

“Although the right to protest can be justifiably restricted in a public health crisis for a limited period, the longer the restrictions are in place, the higher the threshold for their justification and the more urgent the need for their review.”

Ms Ansbro said that protests which comply with social distancing measures ought to be facilitated by the State.

“We’re concerned that recently protesters have been escorted away from protests and prevented from speaking to journalists,” she said.

“While the necessity for restricting some of our rights in the current context is evident, the restrictions must be equally applied, regularly reviewed, and proportionate to the risk.

“Where a protest is small and complying with principles of physical distancing, as we saw in Cork and Dingle lately, there is a very good argument that they should be facilitated.”

The ICCL said it was urging the Government to provide legal clarity on the right to protest under the regulations as soon as possible, “in the interests of ensuring public understanding of and compliance with the restrictions, and safeguarding against disparity in their enforcement by An Garda Síochána”.

It also called on the Government and gardaí to carry out a human rights impact assessment before any new extension of garda powers is announced.

The assessment “should determine whether all measures meet the necessity and proportionality requirements to restrict fundamental human rights, including the right to protest”.

It added that it supports the Government’s efforts to curb the spread of Covid-19 and we encouraged people to adhere to the public health measures.

Gardaí seize €4 million in cash from Dublin organised crime group 12:24
Multi-million Anglo write-offs may be impossible to investigate, commission says 12:06
Dr Tony Holohan expected to return to his post next week 11:46
How one couple’s weekend away resulted in 30 Covid-19 cases 11:18
NPHET to meet as number of Covid-19 cases continues to rise 11:15