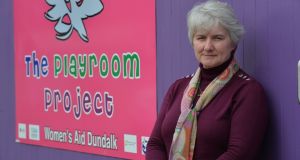 Four families of women and children fleeing domestic violence had to leave their refuge in Dundalk in the last fortnight for their own safety amid concerns about Covid-19.

The families, including seven children, had been at the Dundalk Women’s Aid refuge since before Christmas, but had to leave because of the threat posed by the coronavirus, says manager Ann Larkin.

As a communal refuge where families share kitchens, bathrooms and living areas, social distancing was “just impossible,” she said.

Following contact with Louth County Council in mid-March, four council houses in need of renovation – ‘voids’ – were brought rapidly back into use to allow evacuation of the refuge. One family remains in the facility.

The council had brought more than 20 vacant properties back into use at short notice, according to Paddy Donnelly, the council’s director of services, in preparation for homeless people and families in need of secure accommodation during the pandemic.

And while “ideally” council voids would be fully refurbished and redecorated before a re-let “these were brought to 90 per cent of that standard . . .There are no health and safety issues with them . . . No-one is going to argue over a coat of paint,” said Mr Donnelly.

The families remain under the care and support of the Dundalk refuge, said Ms Larkin. They will be phoned daily and visited “at least weekly”. The council has provided the houses for three months, she said.

She cannot, however, countenance them returning to the communal refuge, where each family had a bedroom but slept in bunks and shared basic facilities.

“It’s not acceptable to ask women to accept communal living because their own homes are not safe. It needs to change,” she said.

In Cork city, the communal Cuanlee refuge has also succeeded in moving its residents out during the emergency, into properties donated by private owners.

It is a problem not confined to these two centres. Of the 38 refuges in the country, nine share communal living spaces.

Nationally and internationally, there is a heightened focus on the increased risk faced by women and children, and men, experiencing domestic abuse who are now more isolated during the pandemic.

Here, gardaí announced Operation Faoiseamh earlier this month, assuring anyone experiencing domestic abuse they would be responded to effectively. From this week a Government-funded advertising campaign on radio will assure women, if their home isn’t safe, help is “still here” from front-line services and gardaí, urging them to call 112 or 999 if in immediate danger, or consult stillhere.ie.

The redoubling of effort and focus are vital, said Women’s Aid chief executive Sarah Benson. The question is whether they will be sustained, and built on to make a radical difference to how we think about the crime.

“I would hope this focus we are seeing now on domestic violence will be sustained, that the empathy and understanding and concern will continue,” she said.

Citing the offers of properties, from private individuals as well as public bodies, for families in crisis, she said there was a “real opportunity” as we emerge from the crisis to mobilise public opinion to take ownership of the issue.

The most recent figures from Safe Ireland, an umbrella body for domestic violence services, show at the end of March there were 104 women and 127 children in refuges. Among these were 23 women and 18 children in communal refuges.

But just looking at the figures in refuges is not enough, Ms Larkin said.

“It’s no good to be still talking about how many refuges do we need? You got to stop women needing them.”

From her perspective, and others at the coalface, a national, cross-departmental strategy that gets to grip with and tackles the facts of domestic violence remains elusive.

For instance, she asked, why are the women and children in refuges not counted in the monthly homelessness statistics?

“Women who are homeless due to domestic violence have the trauma of both and yet they have less support with their homelessness because they are not counted, they are not seen,” she said.

She also questioned why coercive control and domestic violence are not being discussed as part of the social, personal and health education curriculum in school.

“When we go in schools to give talks, teachers will tell us they are seeing the evidence of domestic violence in the students. You can see boys portraying the characteristics of abusers.”

Benson too sees an ongoing tendency of society to see domestic violence as someone’s, or some organisation’s, responsibility to confront.

“It is a crime and it’s everyone’s responsibility to name it. It is unacceptable and people should, where they can, intervene in a way that is safe for the women,” she said.

Domestic violence is “the only crime where the victim is held responsible for finding the solution. She has to get the barring order, leave the home, go out and confront what has happened to her,” she added.

Many helplines remain ominously quiet, indicating many women cannot get the moment in the day, with children off school and perpetrators possibly at home, to make the call. “We have to prepare for a possible onslaught after this.”