‘I’m hardly eating’ says one woman (46), while others complain of stop-start payments 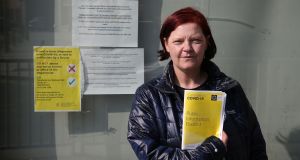 Helena Murphy: ‘I was refused. I have to apply again.’ Photograph: Nick Bradshaw 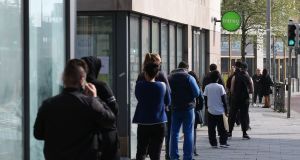 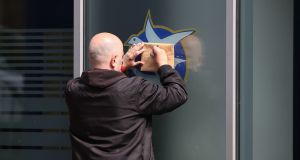 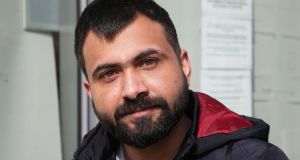 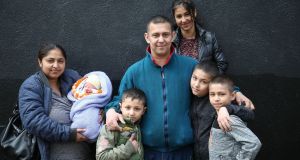 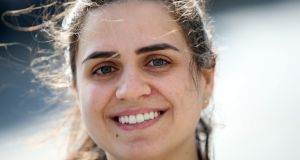 As unemployment reaches unprecedented levels, long queues continue at unemployment offices a month into the lockdown.

Several people queueing at offices on Cork Street in Dublin’s south inner city and on Parnell Street in the north inner city describe desperate financial situations. Many say they have had no income for up to four weeks.

Up to last week, according to the Department of Social Protection, 533,000 people had been approved for the new Covid-19 pandemic unemployment benefit, with 27,300 more approved for the Covid enhanced illness benefit, both worth €350 a week.

However, 68,000 people were turned down “for a variety of reasons”, including that they were already on jobseeker’s allowance, they were not working immediately prior to the lockdown or had provided incorrect PPS or bank account numbers.

By 10am on Friday at the Intreo office on Cork Street, a queue of about 20 people has formed when the office opens. Staff are letting very few inside, dealing with most at a table at the entrance. The queue remains steady for three hours, until the office closes.

Helena Murphy (46), from Pearse Street, had been off sick on illness benefit when she was laid off from her job as a chef in a pub. She was turned down twice for the Covid-19 payment because, she says, she answered on her application that she had last been paid by her employer in February, and so it appeared she was not employed.

“The sick payment finished four weeks ago. The woman is after telling me I should have put down the day I was meant to go back to work as my last day in work. But they don’t give you that facility on the form , so I was refused. I have to apply again.

Syed Abbas (29), who is originally from Pakistan, worked as a chef for seven years. He qualified for the Covid-19 unemployment payment but it has been stopped. He doesn’t know why.

“Last week I got money, this week none. I have one baby, she is six months.” He has been given a phone number to call. “Obviously I am worried. I have no idea where this is going.”

A woman in her 30s, who does not want to give her name, worked in Debenhams on Henry Street.

“We were told it was closing down with this Covid but we all thought we were going back. I was in the restaurant, there about two years.”

Przenek Okznajczyk, from Poland, is here with a friend who is too upset to speak. He has had no payment since he lost his construction job three weeks ago, says Okznajczyk.

“He delivered the form. Yesterday he was sent the form back and told his bank account is not an Irish account. He is with Ulster Bank, which is British. He was told today you must have an Irish account.”

A department spokeswoman confirmed payments will only be made electronically into accounts held in Irish institutions, though clients can nominate a local post office. She said nobody with an Ulster Bank account shoud have issues getting the payment as it is recognised as an Irish financial institution.*

“Why wasn’t he told this the first day?” asks Okznajczyk. “This is all playing games, make him wait, wait, wait. You must understand people’s frustration. He has bills. Landlords were told to wait for the rents. Nobody is waiting. People are getting threatened by the landlords. They will be kicked out on the streets. They are struggling.”

A number of English-language students, laid off from jobs in cafes or restaurants, are here.

Franci Ellen Fin (28), a pharmacist from Brazil, lost her waitressing job on March 14th. She qualified for the Covid-19 payment, got it for one week and it stopped two weeks ago.

“They told me to reapply. I could go back to Brazil but I paid for my visa and my classes. [The Government] promised I would receive this payment and now nothing. I pay €420 a month for a bed in a triple room, in a house with nine people. So we have a problem with the rent. Just two people in the house are still working.”

On Parnell Street a family of seven, including five children between the ages of one month and 14, is homeless. The father, Vasile Lupu, works for a rubbish collection firm. He worked five eight-hour days a week but he has been cut to three days to minimise numbers on the collection truck.

The family are provided with breakfast and dinner in their emergency accommodation and are here hoping for some help buying baby clothes. They say they get no child benefit. Lupu shows his payslip from last week. After “deductions” of €55 his take-home pay was €106 for the week.

“I bring my family from Romania to Ireland, for I get job,” says Lupu. “This virus is making life very, very difficult.”

A Department spokeswoman said a person’s Covid-19 payment “may have stopped for a number of reasons” including that their employer has availed of the wage subsidy scheme and they remain employed. Anyone that should still receive a Covid-19 payment should contact 1890 800 024. “Arrangements will be made to restore their payment or provide them with interim income support.”