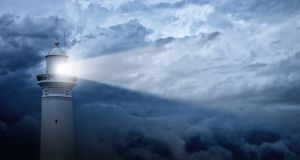 “Our light needs to be like a lantern, a lighthouse, a candle. A beacon in the darkness, a loving warning, an invitation into the space of grace which has been cleared for us by God, in Christ.” Photograph: iStock

I was entranced by a piece of music on the radio the other day and I have listened to it many times since.

Revisiting Psalm 127 reminds me of something my Dad told me years ago. He was chatting to an old nun and she was telling him how when she entered the convent as a young woman there had been dozens of nuns in community together, with new vocations every year. Now there was just a handful of aged sisters left.

Always a great man for the direct question, my Dad enquired of her if it made her sad the way the numbers had dwindled so drastically and how the future seemed unsustainable?

Her response was utterly without anxiety. “I’m not sad at all”, she replied. “It’s God’s business whom he calls to the religious life. If he wants us to keep going he will provide the vocations and call others to join us; if not, we will see out our days peacefully and gracefully.”

There was such freedom and faith in her perspective that I have never forgotten it.

In these days of wringing of hands about falling church attendance and the perils of a society which is largely illiterate about and indifferent to organised religion, we need to be reminded that is God’s Church, not ours.

It is his work to build his Church: to call and equip whomsoever he chooses for this work, to allow branches which are no longer bearing fruit to die, to prune other branches as hard as he sees fit to promote future abundance.

Unless the Lord builds the house, those who build it labour in vain.

I find Rowan Williams’s definition of the Church extremely helpful. ‘The Church is first of all a kind of space cleared by God through Jesus in which people may become what God made them to be . . . a place we are invited to enter . . . a kind of climate or landscape to be inhabited.”

A space cleared by God in Christ. Not a building or a community or a clergy-person or a project (although all these things will have their place within the Church), but a space, a cleared space which we are required to joyfully curate.

We gather around God’s table, not ours.

The Church doesn’t do too well when it is powerful and influential. Our track record is truly shocking at times. Think the Crusades. Think the burning at the stake by Christians of Christians who held a differently nuanced theology. Think the Magdalene laundries. Think the transatlantic slave-trade bolstered by proof-texts from Scripture, think the persecution, today, of LGBTQ+ brothers and sisters.

Perhaps our marginalisation is something to be grateful for.

Perhaps our position as guests of a secular society rather than the architects of Christendom is exactly where God would have us be.

Perhaps, down the line, he would have us be persecuted like some of our brothers and sisters elsewhere in the world, rather than to be the ones who persecute.

We need to let our light be seen but not like a floodlight, mercilessly exposing everything. That is not our task, though it may be God’s in the fullness of time.

Our light needs to be instead like a lantern, a lighthouse, a candle. A beacon in the darkness, a loving warning, an invitation into the space of grace which has been cleared for us by God, in Christ.

Unless the Lord builds the house, those who build it labour in vain.