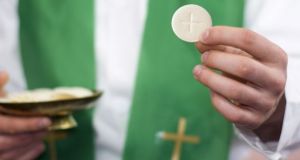 Catholic Primate of All Ireland Eamon Martin has said he is “very much open” to calls for a softening on the church’s clerical celibacy rules to cope with the declining number of priests.

Speaking after Pope Francis declined to deal with the issue in an eagerly awaited apostolic exhortation, the Archbishop of Armagh said the pontiff was not ruling it out but leaving it open for more discussion.

“I think Pope Francis realises this is an issue where there is a lot of divided thinking,” he told RTÉ Radio One’s Morning Ireland.

“I’m very much open to the idea of this and I think Pope Francis is too. He doesn’t shut the idea down, he leaves it open for further discussion within the church.”

In his latest apostolic exhortation, Beloved Amazon, the pope did not refer to recommendations by Amazonian bishops to consider the ordination of married men and women deacons.

Instead, the pontiff urged bishops to pray for more priestly vocations and send missionaries to the region.

The vast majority of villages in the Amazon are unable to celebrate Mass every week because of the shortage of priests. Some villages see a priest just once a year, it is estimated.

Last year a synod of 184 bishops on the future of the church in the Amazon concluded “respected” older, married men should be allowed to become priests.

Archbishop Martin played down suggestions that Ireland is facing priest shortages as dramatic as the Amazon. “I think it is considerably further than where the Amazon is now,” he said.

“Although I wouldn’t be blind to the fact that we have a very major decline in vocations to the priesthood and the religious life.”

Archbishop Martin said if Ireland is to heed Pope Francis’ call, it needs to officially recognise the role of lay people and the role of women in the church.

It is not “simply about ordination to the priesthood”, he said, but about lay men and women organising and administering parishes, making decisions up to diocesan level and “even exercising the pastoral care that in the past priests would have done.”

Archbishop Martin also suggested more Irish priests should be going to the Amazon as missionaries.

“And I think that is what Pope Francis is saying to us. Stay missionary, get out there, go and help these people.”

Fr Paddy Byrne, parish priest of Abbeyliex and Raheen in Co Laois, said “about 85 per cent” of priests in Ireland shared his sense of disappointment over the pope’s refusal to sanction a softening on celibacy rules.

“We are not far away from the reality of what is being felt by the people of the Amazon region,” he said.

“They are hungry for the Eucharist and a now a self imposed famine is being put upon them.”

Fr Byrne said there are “probably more bishops in Ireland at the moment than there are young men in formation for priesthood.”

“So if we don’t change we are facing the exact same (as the Amazon),” he said.

Ireland is facing into a spiritual “famine” because it is running out of priests, a Catholic cleric has said.

The We Are Church International group said Beloved Amazon “demonstrates that the Roman Catholic hierarchy lacks the courage and vision needed to address the real needs of the world and its people”.

Its chair Colm Holmes praised Pope Francis for his “wonderful dreams for social, cultural and ecological issues in the Amazon” but found it “tremendously disappointing” that he could not bring the same vision “to how our church serves the people of the Amazon region, and indeed all people.”

After seven years in office it seemed Pope Francis “talks the talk but does not walk the walk when it comes to enabling the church to fully address the real needs of its members,” Mr Holmes said.