Shaking of hands, taking of Communion on tongue and visiting sick not recommended 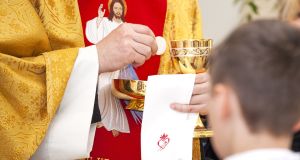 The Dublin catholic archdiocese has advised Mass goers to avoid shaking hands at the Sign of Peace to avoid spread of viruses. Photograph: iStock.

The Dublin catholic archdiocese has advised Mass goers to avoid shaking hands at the Sign of Peace to avoid spread of viruses. At Masses or other religious ceremonies worshippers can “make a bow of the head to the people around you and say ‘Peace be with you’,” the Dublin archdiocese has recommended.

It added that “during the sign of peace it is fine to simply smile, wave, or bow to others to convey Christ’s peace to them.”

It has also discouraged receiving Communion directly on the tongue during the flu season or when or a more serious epidemic is circulating and that those with symptoms who are offered the chalice during Communion should not do so.

It has further advised that people with a virus “are dispensed from their Sunday obligation to attend Mass.” They “should stay at home for seven days from the onset of illness. The obligation to take part in Mass does not apply to those who are sick. The sick person might join in celebrating Mass via the internet or radio and television.”

Water in holy water fonts should be changed frequently “followed by cleaning of the font with a household detergent based cleaner (such as washing up liquid),” it said.

In general parishes should “advise clergy and the congregation not to attend if they are ill; provide bins for disposal of tissues at Church gatherings; ensure all hard surfaces that are frequently touched, such as door handles, hand rails, taps, are cleaned regularly with a household detergent or antiseptic wipes.

They should “ensure hand-washing facilities, including soap and disposable towels, are well maintained and supply tissues and hand-washing gel at Church services/gatherings.”

More generally it has advised that people “do not visit the sick to avoid compromising both their own health and the health of the person they are visiting or their families.”

It recommended that this advice for “when seasonal flu or a more serious epidemic is circulating” should be published in parish newsletters.

All in the Game: No Moore medals for Steven Gerrard

1 Forget a grand coalition – here is what the next government will most likely look like
2 Storm Dennis washes abandoned ‘ghost ship’ onto rocks off Co Cork
3 Everything you need to know about pensions but were afraid to ask
4 New network of 1,322 speed cameras comes into force today
5 Magdalene survivor takes case to UN torture committee
Real news has value SUBSCRIBE