Thinking Anew – A message of hope for people everywhere 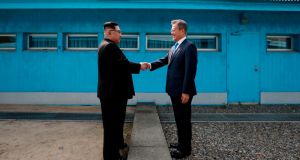 As first steps are taken on the road to a peace on the Korean peninsula it is worth remembering that when Jesus spoke about peace he was thinking about something quite different to what people generally have in mind. He said: “Peace I leave with you, my peace I give to you. I do not give to you as the world gives.”

This can be linked to the fact that according to St John’s gospel, God knows what is best for his world and that is revealed in the life and teaching of Jesus Christ: “For God sent not his Son into the world to condemn the world; but that the world through him might be saved.”

God’s desire is to rescue struggling humanity from itself and give it the peace and harmony that humans on their own can never create. This gives us hope.

Walt Whitman explains why hope is important: “Oh, how good a thing it is that the great God who has placed us in this world – where amidst so much that is beautiful, there still exists vast bestowal among men of grief, disappointment and agony – has planted in our bosoms the great sheet anchor, hope.”

The Day of Pentecost which we celebrate tomorrow places Christianity firmly on the world stage with a message of hope for people everywhere. No single nationality or ethnicity is superior to another; all hear the gospel in words they understand.

There is a new vision for humankind and those who used to be regarded as superfluous have vital roles.

The Spirit is available to all, a revolutionary end to the old – and perhaps not so old – way of reserving spirituality and authority to the few. Sons and daughters prophesy, the young as well as the old, and those – women for example – long treated as a voiceless underclass are empowered by the Spirit. There is no place in a spirit-led church for self-serving religion focussed only on self which affirms us – individuals and churches – as we are, rather than making us what God wants us to be.

This is important because as tomorrow’s gospel reading points out, there is work to be done in a world gone wrong: “And when he (the Holy Spirit) comes, he will prove the world wrong about sin and righteousness and judgement: about sin, because they do not believe in me; about righteousness, because I am going to the Father and you will see me no longer; about judgement, because the ruler of this world has been condemned.”

The world thinks of peace as the absence of war but ignores the underlying causes of war such as competing ideologies, racial and religious tensions and economic injustice. Christianity has a more realistic understanding of what makes for real peace.

The South African theologian John de Gruchy recognised this during the apartheid years by referencing the vision the early Christians had of a new heaven and new earth: “It is the same vision which has motivated the prophets throughout the centuries, the vision of the kingdom of God threatens those who possess everything except the ability to share with others. The powerful and privileged fear the dreams of the poor and the visions of the prophets because they derive from the coming kingdom of God, God’s purpose for his world.”

Martin Smith, an Anglican priest, writing about the impact of Pentecost speaks of “the Christian experience of receiving through the Spirit our real identity, pregnant with new possibilities: an identity not based on the past, on our origins, our ancestry, our allotted place in society, but on the part we are being given in the realization of God’s future.”

The idea that each of us has a role “in the realization of God’s future” is quite daunting but it makes sense because we all have influence, in our families, in our places of work and in our local communities. As we pray for peace in Korea we should remember that.