‘I know people get pregnant by rape, but there’s a lot of counselling out there for that’ 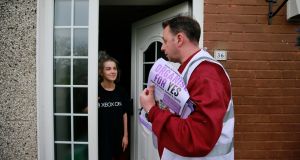 Engagement on the Eighth Amendment referendum was varied on the doorsteps in two areas of north Dublin in the past week. There appeared to be a much greater interest and knowledge about the May 25th vote in working class Donaghmede than in the more disadvantaged Darndale.

Described by the State social inclusion agency Pobal as “very disadvantaged” Darndale has an unemployment rate of 44.6 per cent with just 2.7 per cent of its residents having a third-level education.

The first few people who speak to The Irish Times in Darndale on Sunday afternoon say they would not be voting in the referendum.

“I don’t vote. I haven’t voted in 25 years, “ says one man strolling towards the Belcamp estate.

In Di Lucia’s chipper, a young man does not “care if it [abortion] comes in or not” while the young woman behind the counter shakes her head.

“I haven’t really thought about it,” she says.

Two women in their 30s say they will definitely vote Yes, adding they had not had to think about it.

Across the road in Belcamp Green a man in his 30s says he will be voting No.

“My little girl was born at 23 weeks. We were in Holles Street a few days ago and other parents of premature babies, they’ll be voting No. Myself and my partner, we’d be strong No voters now.”

A few doors down, however, an older man, fixing a scooter for his grandchild is reluctant to say how he will vote.

When pressed as to what might influence his thinking, he says; “The Eighth. We have to get rid of it. That’s all.”

In Tulip Court a man sitting outside his home, listening to Irish rebel music, says: “I don’t actually vote. I think it’s disgraceful what they’re talking about. It’s murder. I know people get pregnant by rape, but there’s a lot of counselling out there for that. If I was voting I’d vote No.”

An older woman says she will vote Yes.

When asked why, she says: “Why do you think? Come on.”

A few evenings earlier, Rosa ( Reproductive rights against Oppression, Sexism and Austerity) lead a Yes canvass in Newgrove, a small estate in Donaghmede. Pobal describes the area as being “marginally below average”.

Laura Penrose (20) says she just got her name on the supplementary register.

“Oh I’m voting Yes, because this could affect me or my friends.”

At another door an elderly man says he will vote No. “I spent seven years in England praying outside abortion clinics for the girls going into them,” he says.

A woman in her 30s says she will vote Yes, explaining that she had a diagnosis of a fatal foetal abnormality in 2012, when she was 32 weeks pregnant.

She asked to be induced but was told this was impossible. She could not afford the more than €1,000 it would cost to travel to Britain for the same procedure. She had to wait, and was induced at 39 weeks when the baby was fully formed. It died during the birth.

“The absolute stress of it. It was the worst seven weeks of my life. It makes my blood boil when I think about it.”

A middle-aged man says he will vote Yes.

“It’s something women should be deciding with their doctors,” he says. “And if doctors can’t do their job right, it has to change.”

On the canvass is local Solidarity councillor Michael O’Brien. He finds most people in working-class areas such as Newgrove are “very practical” in deciding how to vote.

“They don’t have notions the way some in the more wealthy areas might.”