Yes or No? Immigrant communities add their voices to the abortion debate

‘Many of those who do not have the right to vote are involved in campaigning for both sides. Even though they can’t vote it will still affect them’ 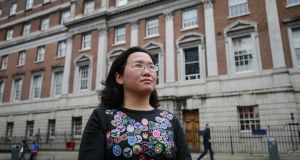 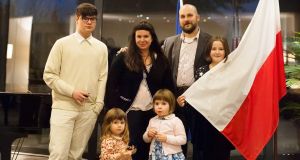 A Chinese woman who miscarried in a Dublin hospital. A Polish man whose former girlfriend aborted their child without telling him. A Brazilian woman whose sister was violently raped at a bus stop. A Muslim man who says a foetus becomes a baby once it develops a soul at 120 days.

In 1983 the vast majority of people canvassing for or against the Eighth Amendment were Irish. More than three decades on, tens of thousands of immigrant women are now affected by our abortion laws. While the more than 535,400 non-Irish nationals living in Ireland will not be eligible to vote in next week’s referendum, many have joined campaigns on both sides of the debate to add their voices to an issue which, as residents in this country, directly affects them.

Tian Yu Lloyd had been living in Ireland for more than a decade when she became pregnant with her second child in 2013. At 11 weeks she attended the National Maternity Hospital on Holles Street, Dublin, for a routine scan and was told the foetus inside her was not growing properly. “They said it was only the size of six weeks so they would observe and see what happened. I asked if this isn’t working out, what can be done, but they said we need to observe.”

Lloyd returned to the hospital the following week for another scan and was told doctors needed to continue to observe the foetus. Twenty-four hours later she was taken to hospital by ambulance after she started bleeding heavily. “The blood was gushing out and they had to give me a blood transfusion. I remember thinking why didn’t they deal with it on the spot knowing that the foetus wasn’t growing. Why did I have to wait and end up in an emergency situation?”

“I knew the pregnancy wasn’t going to work out, the least the doctor could have done was to give me all the options so I could have chosen what was best for me. And it wasn’t just about me, it was my family too and my young daughter. It was a traumatic experience.”

As a Chinese national Lloyd will not be able to vote in the upcoming referendum on abortion. However, she recently joined the Yes campaign and has been canvassing in her local area. If she became pregnant and needed a termination she would have to apply for a visa to travel to the UK and says the current Irish abortion law “impacts migrant women more than anyone else”. “It would be one to two months before I could travel so that option might no longer be available for me.”

Krzysztof Wisniewski, who lives in Waterford with his family and moved to Ireland from Poland 11 years ago, has been anti-abortion most of his adult life. When he was younger his former girlfriend became pregnant and decided to have an abortion without telling Wisniewski. “I was devastated. Children were always cherished in my family and it struck me very hard. That child was half mine and I believed she had done the wrong thing, we could have worked it out. From that moment I started to believe abortion is wrong.”

Wisniewski says his anti-abortion stance is not connected to his Catholic beliefs. “I’m a very pragmatic person and I try to find the answer scientifically. I believe life begins at conception.”

He would like to see more measured conversations between both sides of the debate in the final weeks leading up to the referendum. “I’m not going to tell anybody what to think or how to vote. Everybody should make up their own minds. But it’s important that people get basic information about what abortion is.”

Barnaba Dorda who is also from Poland and has lived in Ireland for 12 years would vote Yes in the referendum if he could. He says the debate around abortion has created divisions within the Polish community and has friends who are both for and against repealing the Eighth Amendment. “It’s so complicated and it’s difficult to argue and not become emotional about it. Many of those who do not have the right to vote are involved in campaigning for both sides. Even though they can’t vote it will still affect them. They want to defend their rights.”

Lilian Ferreira from Brazil grew up in a conservative household where her father, a Protestant minister, believed abortion should be outlawed. However, when her 18-year-old sister was violently raped the family’s point of view transformed.

“It’s very easy to be against other people’s experiences, you never think it will happen to your own family. But it changed my family forever. My parents had been completely against abortion but when my sister was raped their view towards women changed completely, they became more compassionate.”

Ferreira, who has lived in Ireland for a decade, says she does not agree with abortion on demand but says women should be able to decide what happens to their bodies. She will not be able to vote on May 25th but is canvassing for a Yes vote. “It makes me feel pretty crap that I can’t vote, 80 per of my friends are Irish, my step-son is Irish, my in-laws are Irish. But I’ll do my best to conquer more votes of the Yes side.”

Fazel Ryklief from the Islamic Foundation of Ireland in Dublin says the mosque’s Imam has encouraged those who can vote to choose No on May 25th. However, he says Islam does not accept that the life of the mother and the unborn are equal and that abortion should be permitted in certain cases. “The mother’s life is paramount. She might want to have more children and of course, if her health is in danger the child might need to be aborted.”

Muslims believe the foetus becomes a baby at 120 days when “live is given” and it develops a soul, says Ryklief. “In the first 120 days generally if the mother’s life is in danger and it has been proven without dispute that the child will not survive the pregnancy of course abortion is permitted. The mother always comes first.”

Similarly, Rabbi Zalman Lent from the Dublin Hebrew Congregation says the mother’s life is always considered more important than the foetus under Jewish teachings, adding that the soul enters the foetus at 40 days. “The Jewish viewpoint is relatively balanced. The orthodox view is that every life is precious from the moment of conception. After 40 days it’s considered to be a human being but the mother’s life will still take precedence.”

Dr Hemant Kumar, president of the Vedic Hindu Cultural Centre, says there is little mention of abortion in the Hindu scriptures and thus religion does not come into play if a woman requires an abortion. As Hindus believe in reincarnation he says the soul of the foetus will simply pass into another body if the pregnancy is terminated. “There is no guidance from the scriptures so we go for the medical and scientific evidence. With fatal foetal abnormality or rape, or if the mother’s health is in question, then abortion is clear. We will support whatever action is taken by the mother and father.”