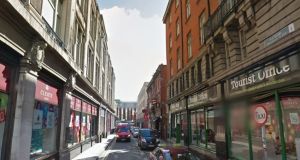 Plans to upgrade streets close to the Pro-Cathedral and O’Connell Street in Dublin have been axed, amid concerns that they would compromise the safety of the visually impaired.

However, councillors said they were supporting the concerns of the Blind Legal Alliance, which said the new layout would cause difficulties for users of guide dogs.

The upgrade would involve the removal and replacement of the existing asphalt and concrete road surfaces with a paved granite surface, to include loading bays, disabled parking and taxi ranks.

As part of the resurfacing the council wanted to remove the existing kerbs and bring the footpaths to the same height as the roadway, providing a “level surface” similar to the pedestrian streets of Henry Street and Grafton Street.

Sackville Place and Cathedral Street were to remain vehicular streets, with taxi ranks, and the new surface would make them unsafe for visually impaired people, according to Robbie Sinnott of the Blind Legal Alliance.

“Large sections of both streets will be used by taxis 24-7, and cyclists will have free rein. So, kerbs and dished crossings need to be provided for vulnerable pedestrians.”

Guide dogs are trained to stop at kerbs of a minimum height of 60mm, he said. The granite surface also posed difficulties for people with disabilities, including elderly people who might be visiting the cathedral.

Both streets were experiencing increased footfall since the introduction of the Luas to Marlborough Street but were “in very poor condition”, the council said.

It said it had taken the submissions from disability groups into consideration, and all materials used would comply with “minimum design requirements for slip resistance”. It said “drainage channels” would also be used to demarcate the footpath from the road.

Councillors said there could be “horrific accidents” which could leave the council open to legal action. They voted by 32 votes to 20 against the refurbishment plan.

Mr Sinnott last year won a High Court case over the State’s duty to vindicate his right to vote privately and without assistance in referendums and elections. Tactile ballots will be used for the first time in the forthcoming referendum on the Eighth Amendment.