Renewed appeal made for recovery of head of Archbishop statue 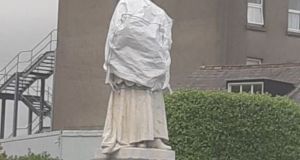 The statue was damaged in June.

The Archbishop of Cashel Kieran O’Reilly has repeated his appeal for information which might lead to recovery of the head removed from a statue of a predecessor in Thurles Co Tipperary last June.

The sculpture of Archbishop Leahy had stood for more than 100 years outside the doors of Thurles cathedral Some time on the night of June 26th/27th its head was knocked clean off, spreading fragments of stone around the base.

Archbishop O’Reilly told people at Mass there on Sunday morning that “it is now nearly five months since the statue was damaged”. Removal “of the head has upset the people of the archdiocese and, in particular, the people of the town of Thurles,” he said.

Archbishop O’Reilly asked that all information be given to gardaí at Thurles Garda station. Inspector James White of Thurles attended the Mass and Archbishop O’Reilly said he would be available to speak to interested parties afterwards.

“A committee of the parish is offering a reward for information leading to the recovery of the head of the statue of Archbishop Patrick Leahy, ” he said.

Archbishop Patrick Leahy was Archbishop of Cashel & Emly from 1857to 1875. “He was the archbishop who undertook the building here of the cathedral of the Assumption, in Thurles. He participated in the First Vatican Council and was highly regarded in the Ireland of the 19th century.

“In appreciation of his ministry and work in building the Cathedral, a statue was erected in his honour in the forecourt of the cathedral in 1911,” Archbishop O’Reilly said today.