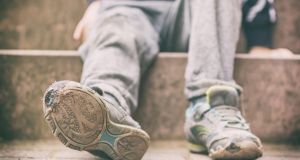 Poverty rates in Ireland have fallen slightly in the past year, but the struggles facing the vulnerable groups have worsened, new data from the Central Statistics Office shows.

Among those whose living conditions have worsened in the year between 2017 and 2018 are older people, people out of work due to illness or disability, the unemployed and early school leavers.

Child poverty has fallen from 18.4 per cent to 15.9 per cent, though this rate still represents 202,000 children, according to the Survey on Income and Living Conditions for 2018, published on Thursday.

It shows that the proportion of people “at risk” of poverty fell from 15.7 per cent in 2017 to 14 per cent last year – a decrease described as “not statistically significant” by the CSO.

Individuals or households living on incomes less than 60 per cent of the national median income are deemed “at risk” of poverty. In 2018 this meant below €25,719 per year.

Poverty is also measured in terms of “enforced deprivation”, which means doing without at least two of 11 indicators due to inability to afford them, such as having a roast or equivalent once a week, two pairs of strong shoes, ability to replace worn-out furniture or having friends or family over at least once a fortnight for food or drinks.

The national deprivation rate fell from 18.8 per cent in 2017 to 15.1 per cent last year, and for all groups except the unemployed, among whom it increased from 41 per cent to 41.6 per cent.

Consistent poverty – living both below the poverty line and experiencing enforced deprivation – fell from 6.7 per cent to 5.6 per cent.

Rates are highest among the unemployed (27.6 per cent); those out of work due to illness or disability (21.3 per cent); and lone-parent families (19.2 per cent). Families with two parents, in contrast, have consistent poverty rate of just 5 per cent.

The least consistent poverty is found among households with three or more adults in work (0 per cent); individuals with third-level degrees or higher (1.4 per cent); and people aged 65 and over (1.7 per cent).

While Minister for Social Protection Regina Doherty welcomed the downward overall trend and particularly the decrease in child poverty, Social Justice Ireland stressed “more than 689,000 people are living in poverty in Ireland”.

Ms Doherty, who will publish a new national inclusion strategy next month, said: “These figures reflect in part the positive impact that the targeted measures have had on those most in need, particularly children. We are determined to build on today’s progress.”