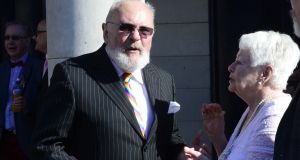 Senator David Norris: ‘What has happened in Northern Ireland is quite extraordinary. The tail is wagging the dog.’ Photograph: Cyril Byrne/The Irish Times

The Government must revisit laws which allow churches discriminate against people, Senator David Norris has said.

The recent removal of an organist at the Church of Ireland in Drumcliffe, Co Sligo and of an elder at the Presbyterian Christ Church in Sandymount Co Dublin, when both men married their same sex partner, made this a necessity, he said.

Same sex marriage became legal in Ireland following a May 2015 referendum when it was overwhelmingly approved by the electorate.

A a practicing member of the Church of Ireland, one of the 40 Churches worldwide which make up the Anglican Communion, Senator Norris felt exemption for the Churches should not be allowed in such circumstances, but particularly where positions such as organist were concerned.

What he described as a “clique” in both the Church of Ireland and the Presbyterian Church, originating in Northern Ireland “with a right wing, conservative agenda,” had “an eye on controlling the whole church” in each case, he said.

“They do control the Presbyterian Church,” he said, noting how last year it decided gay couples could no longer be full members and their children could not be baptised. It also cut ties with the mother Church, the Church of Scotland, because of a perception that it was becoming too tolerant on same sex issues.

“Presbyterianism started in Scotland. What has happened in Northern Ireland is quite extraordinary. The tail is wagging the dog. It flies in the face of the words of Jesus Christ and his ‘suffer little children, and forbid them not, to come unto me’,” he said.

He recalled how the growth of the right wing, conservative movement Gafcon within Anglicanism, “a conservative schism,” had begun “among wealthy evangelicals in the southern United States and then spread to Africa.

“They scapegoat gay people and rewrote history to say there was no homosexuality in Africa but that it had been introduced by corrupt Westerners - a complete lie!,” he said.

Where Gafcon “schismatics” were concerned Senator Norris regretted “the lack of a prophetic voice within Anglicanism” and described comments by Archbishop of Canterbury Justin Welby in Dublin last weekend on Gafcon as “classic Anglican dithering.”

Archbishop Welby said: “I don’t want to talk about them as though they were the enemy. My sister or brother in Christ is never my enemy.”

Senator Norris recalled how “Jesus never offered one word on the subject of homosexuality.”

The first to do so “was St Paul. He never met Jesus and went from persecuting Christians to women and gay people.” Such persecution was “Pauline, not Christian,” he said.

Where both the Church of Ireland Presbyterian Churches were concerned, in his view, “the ordinary decent people are being betrayed” by both.

Meanwhile Steven Smyrl, who was dismissed as elder of the Presbyterian Church in Dublin’s Sandymount last month following his same sex marriage, has written to Northern Secretary Julian Smith, requesting removal as a Lord Lieutenant’s deputy in Belfast of Rev Dr Frank Sellar.

A former Moderator of the Presbyterian Church, Rev Dr Sellar was the most senior minister on the Commission which dismissed Mr Smyrl.

In his letter Mr Smyrl described himself as “a British citizen living in the Republic, but whose roots are in Belfast.”

The Lord Lieutenant of the County Borough of Belfast, currently Fionnuala Jay-O’Boyle, is official representative of Queen Elizabeth at events.

Mr Smyrl claimed Rev Dr Sellar action “renders untenable his continued appointment as a representative of Her Majesty the Queen in the city of Belfast.”

He also called on Presbyterian Moderator Rev Dr William Henry “to publicly acknowledge the humiliation and hurt” caused to him by the dismissal.