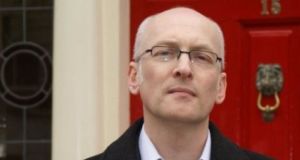 Steven Smyrl: ‘I have nothing to be ashamed of’

An ordained Presbyterian Church elder forced from his role because of his same-sex marriage says he fears a “witch hunt” against other gay members after authorities dismissed his appeal.

Defending its actions, the Presbyterian Church in Ireland said ordained leaders should “in their own lifestyle reflect the clear and consistent position of the church with regards to marriage”.

Steven Smyrl (53), a genealogist from Rathgar in Dublin, was dismissed as an elder at Christ Church Sandymount last month after an internal investigation into his relationship with his librarian husband, Roy Stanley (60).

Mr Smyrl was ordained an elder – helping administer to the congregation – in 2007. His marriage to Mr Stanley, who attends the same church, was widely known and accepted, he said.

Rev Trevor Gribben, the Presbyterian Church’s Clerk of the General Assembly, said the commission ruled that “being in either a same-sex civil partnership or a same-sex marriage is not compatible” with Presbyterian leadership.

Rejecting the dismissal, Mr Smyrl said: “Is there going to be a witch hunt from one congregation to another? Are people going to be encouraged to dob people in, to squeal?

“Through word of mouth, I know there are many gay elders. They just keep their heads down. They are probably thinking today: am I next? Do they have to go further back into the closet,” he went on.

The Presbyterian Church is entitled to disagree with same-sex marriage, he said, but “they did not need to demean and diminish and dehumanise me, the way they have”.

He said he would go back later this month to the Sandymount church, which he has not attended for five months, “holding my head high, because I have nothing to be ashamed of”.

In a statement the Presbyterian Church said it “had the right to order its own affairs under the Word of God, our supreme standard, and guided by our confessional subordinate standards.

“A consequence of this is that those in ordained leadership within our church are required to subscribe to the church’s subordinate standards as a confession of their own faith and to adhere to the doctrinal position they outline.”

1 Donald Trump’s political success is based on racism
2 Ireland earns ‘right to be hopeful’ again as Government fast-tracks plans to reopen country
3 India overtakes Italy as sixth-worst country affected by Covid-19
4 Coronavirus: People to be allowed to travel anywhere in their county from Monday
5 ‘White Irish people have never had to think about this’
Real news has value SUBSCRIBE