Getting IVF abroad: ‘Our daughter is stateless, she doesn’t exist’

Irish/Polish couple call for State to recognise their daughter, born through IVF abroad, as Irish 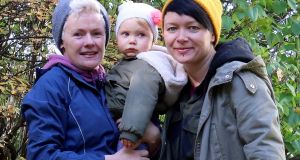 Sinéad Deevy, Kashka Sankowska and their daughter Sofia. The couple has been unable to secure Irish citizenship for their daughter born through IVF in Spain

An Irish/Polish married same-sex couple, who have been unable to secure Irish citizenship for their daughter born through IVF in Spain, have called on the Government to grant their 15 month old an emergency passport so they can return home to regularise their child’s nationality.

Sinéad Deevy and Kashka Sankowska, who are in Poland, say their daughter Sofia has been left stateless because of the lack of rights that exist for same-sex couples who go through fertility treatment abroad to have a child.

They say sections two and three of the Children and Family Relationships Bill, which deals with donor-assisted reproduction, should be amended so all children born through IVF outside the State qualify for Irish citizenship. While the Bill was passed through the Oireachtas prior to the same-sex marriage referendum in 2015, parts two and three of the act have not yet been enacted.

“The Irish public believes all gay people have the same rights as straight people now, but we don’t,” Ms Deevy told The Irish Times by phone. “Nobody asks any questions to straight couples when their children are born abroad to an anonymous donor.”

Before travelling to Spain, Ms Sankowska spent four years trying to get pregnant through IVF in Poland. As the process was too expensive in Ireland, they decided to attempt IVF in Spain which was “very liberal and open” towards same-sex couples trying to have a child.

In 2017 Ms Sankowska became pregnant and in April 2018 the couple was married. Less than three months later, Sofia was born in Spain. The couple thought the second and third sections of the Children and Family Relationships Bill had been enacted and, as a result, believed Sofia’s birth abroad would not affect her right to Irish citizenship.

However, in February 2019 the couple received a letter from the Department of Foreign Affairs passport office which said as Sofia’s birth mother was not Irish, she was not considered an Irish citizen. The letter cited the Irish Nationality and Citizenship 1956 Act under which “a parent is understood to mean either the ‘mother’ or ‘father’ of the child. For the purposes of Irish law, the mother of a child is the person who gives birth to the child or a female adopter of the child”.

They also contacted the Department of Health but were told provisions within parts two and three of the family act only relate to children born in the Irish State. They contacted a number of Government Ministers, including the Minister for Foreign Affairs, but have been offered no solution.

Ms Sankowska also called the Polish embassy in Madrid after Sofia was born and says she was promised a temporary passport. However, when she contacted the embassy again a few months later she was told a registration of Sofia’s birth could not be issued as Polish law did not recognise a birth certificate with same-sex parents.

As a third option, the couple hired a lawyer to apply for Spanish citizenship for Sofia which she was entitled to under Spanish law but later learned as a gay couple, the process could take up to four years. In June the family drove to Poland to stay with Ms Sankowska’s family as they could no longer afford to live in Spain during the high season.

While they are happy to be with family, they often fear for their safety as a gay couple in Poland.

“There is a strong anti-gay movement supported by the current government,” said Ms Sankowska. “We wouldn’t be openly affectionate on the street with each other, especially when Sofia is with us. We would definitely be scared.”

“We only left Ireland on a temporary basis, we had never thought of moving away permanently,” said Ms Deevy. “Kashka lived in Ireland for over 10 years before and she almost feels Irish, I’ve got a house in Crumlin. Right now we feel we’ve been abandoned with no support from the Irish Government. Our daughter is stateless, she doesn’t exist.”

In the short term, the couple are requesting an emergency Irish passport for their daughter but in the long term they say the Government must reassess legislation around babies born abroad through IVF to gay couples. They are also launching a campaign entitled “stateless child of a rainbow family” with the support of the Nelfa and All Out LGBTQ international charities to raise awareness of their situation.

“Was the same-sex marriage referendum just a publicity stunt? There’s no equality in this,” said Ms Deevy. “We’re speaking to you not only behalf of ourselves and our families but on behalf of the whole LGBTQ community in Ireland and outside of Ireland.”

Asked to comment on the couple’s situation, a department of health spokesman referred the query to the Department of Foreign Affairs (DFA). A DFA spokeswoman said a person born outside the island of Ireland is an Irish citizen if born to an Irish-born, Irish citizen parent. As per the 1956 act, the State recognises the mother as the person who gave birth to the child, she said. The Department of Justice said it could not comment on individual cases.