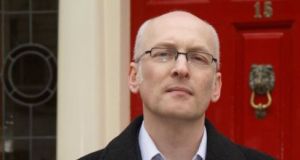 Steven Smyrl: ‘I just said to myself that I love my husband and I have nothing to be ashamed of.’

An ordained Presbyterian Church elder says he feels “dehumanised” by church authorities who forced him from his role because he is in a same-sex marriage.

Steven Smyrl (53), a genealogist from Rathgar in Dublin, was dismissed as an elder at Christ Church Sandymount after an internal church commission was set up to investigate his relationship with his librarian husband, Roy Stanley (60).

Mr Smyrl was ordained as an elder – who helps run the congregation – in 2007. His marriage to Stanley, who attended the same church, was widely known and accepted by the congregation, he said.

“They recognise the love between us is something genuine,” he told The Irish Times.

“We weren’t pretending to be anything other than what we are – two men in love with each other.”

The couple, who have been together for 20 years, entered a civil partnership in 2011, and got married in November 2018, after being “overawed and humbled” by the marriage equality referendum vote in 2015.

Months before their simple registry office ceremony, the Presbyterian Church voted for a ban on anyone in same-sex marriages being full members of the church.

Mr Smyrl said he wouldn’t allow that to stop their marriage and, although he expected possible fall-out, he has been left “brimming with hurt and anger” at the “witch hunt” waged against him since.

The then moderator of the Dublin and Munster Presbytery, the Rev Alastair Dunlop jnr, contacted Mr Smyrl in April saying there had been “concerns” raised relating to his position as an elder on the back of a complaint.

Mr Smyrl said he was not told what the concerns were.

Two days later he got a registered letter requesting a meeting, but he continually refused a meeting until he was told the nature of the concerns. It wasn’t until late May that he was told they related to his marriage.

A six-person Presbytery commission – a type of church court – was set up to investigate. Mr Smyrl said he requested any information held about him under the General Data Protection Regulation (GDPR).

When I saw the photos of Roy and I being used in this way, I thought, is this a Christian church doing this?

“It was unbelievably distressing. I wasn’t sleeping at this stage, I couldn’t eat properly,” he said.

The information released to him under GDPR was a single email, with the sender’s name redacted, no text, and seven attachments, he said. These were screenshots from his and his husband’s Facebook pages with photos of their wedding and “happy holidays” together.

“I felt really degraded and dehumanised by it. When I saw the photos of Roy and I being used in this way, I thought, is this a Christian church doing this? It is absolutely appalling.”

Mr Smyrl said he was “in such an awful state” over the summer with continuing correspondence and requests to meet church authorities that it sent him “into a downward spiral of depression”. Both his GP and counsellor wrote letters saying he was unfit for any meetings.

He asked “how many other people” were the church authorities doing this to. “We do hear in the Presbyterian church of these secret commissions, and people are so ashamed that they retreat back and say nothing afterwards. I just said to myself that I love my husband and I have nothing to be ashamed of.”

Mr Smyrl was told by registered letter on September 18th – the day after his return – that he was being removed from his role because “my same-sex marriage was incompatible with being an elder in the Presbyterian church”.

The former church elder is appealing against his dismissal.

A church judicial commission is expected to meet next week to deal with his appeal.

A spokesman for the Presbyterian Church in Ireland declined to answer a number of questions or respond to the allegations.

“When any matter is being considered by the Church’s internal processes, it would be inappropriate for anyone to make any public comment on the matter, or any associated accusations,” he said.