Delight among crowd of over 40,000 as pope tours Knock shrine and acknowledged ‘open wound’ of abuse 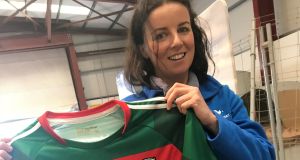 Audrey Elliott with the Mayo football jersey signed by Pope Francis at Ireland West Airport, Knock, Co Mayo, which she hopes will lift the Mayo ‘curse’ so the team can win an All-Ireland title. Photograph: Cate McCurry/PA

When Pope Francis flew into the west of Ireland on Sunday morning, he may have felt there was a “lot done, more to do”.

During his 90 minutes in east Mayo, he acknowledged the “open wound” of abuse, prayed for healing of survivors, and for a resolve that such situations would “never” be permitted to occur again.

He also sent “warm greetings” to the people of Northern Ireland, appealed for reconciliation, drew tears and smiles from over 40,000 people, and did his bit to lift the “curse” by signing a Mayo Gaelic football jersey.

A full moon was obliterated by a carpet of cloud as many ticket-holders set out from 4am for the papal visit to Knock’s Marian shrine. It was on such a night of torrential rain in 1879 that 15 witnesses reported seeing an apparition of the Virgin Mary, Saint Joseph and Saint John the Evangelist by the village parish church’s south gable.

All 15 were saturated, though the gable wall remained dry. Historians have linked the event to the excitement generated by land agitation – though attempts were made to play down links with formation of the Land League in Co Mayo.

If Pope Francis was appraised of any of this, he didn’t have much time to absorb it as his Aer Lingus flight EI 1979 - known as Shepherd 1 - touched down at Ireland West Airport in Atlantic mist. Waiting to welcome him was a party including Minister for Rural Development Michael Ring, Archbishop of Tuam Dr Michael Neary, four western bishops, Mayo cathaoirleach “Blackie” Gavin and 100 pupils from several neighbouring schools.

Back at the shrine,where Knock Parish Choir in blue rain ponchos had been singing for the best part of an hour, large screens broadcast a live feed. Thousands held a collective breath as they waited for the plane door to open. There was a ripple of laughter when an airport staff member gave a polite knock.

It was shortly after 10am when the cavalcade arrived, and the pontiff transferred to his popemobile. It wove briskly through the grounds to the music of Carolan’s Welcome, followed by a security detail in shades. Alighting at the Apparition chapel, Pope Francis was introduced to shrine rector Fr Richard Gibbons, and bells rang thrice for a period of silent prayer.

Two young parishioners, John Curry (5) and Catherine Murray (8) presented him with a taper to light a candle, and one could have heard a match drop outside as the pope sat with eyes closed. He then presented rosary beads to the shrine, and delivered his Angelus address.

Speaking in Italian, the pope said he had prayed before the statue of Mary for “all the victims of abuse of whatever kind committed by members of the church in Ireland”, and “none of us can fail to be moved by the stories of young people who suffered abuse, were robbed of their innocence and left scarred by painful memories”.

“This open wound challenges us to be firm and decisive in the pursuit of truth and justice,” he said. “I beg the Lord’s forgiveness for these sins, and for the scandal and betrayal felt by so many others in God’s family.”

“ I ask our blessed mother to intercede for the healing of survivors and to confirm every member of our Christian family in the resolve never again to permit these situations to occur...”, he said, to restrained applause.

Sisters Annette Duffy and Peg Douglas of nearby Aghamore were overwhelmed, as was Rosalie Roddy who had travelled all the way from Cahirciveen, Co Kerry. Annette had been a child hoisted up on shoulders during Pope John Paul II’s brief visit in 1979, and this was “ten times better”, she said.

Similarly delighted were Rachel and Jessica McGowan, aged ten and 11 respectively, from Claremorris, and Emily McNally (16) and Annie Noonan (16) from Westport. A party from Co Roscommon, including Kitty and Willie Greene and Helen Duffy, were full of praise for the organisation, and welcomed the pope’s acknowledgement of the hurt caused by child sexual abuse.

Michael McCormack and his son, Ronan, from north Galway had come wearing t-shirts with the image of Pope Francis, emblazoned “Mayo for Psalm”. They had bought them in Forde’s drapery in Ballyhaunis, where proprietor Tom Forde couldn’t resist linking Mayo football’s quest for the Sam Maguire cup to the papal occasion.

And so there was general delight at a “breach of protocol” as the pope boarded his plane. Ireland West Airport staff member Audrey Elliott asked him to sign a Mayo football jersey. He obliged with a large sweep of “Francis” in marking pen.

“Sometimes you have to chance these things,” airport marketing manager Donal Healy said afterwards. “Hopefully the curse has been lifted,” he said.