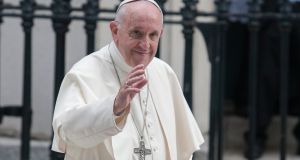 Pope Francis leaving the Pro-Cathedral in Dublin on Saturday before a meeting with abuse survivors. Photograph: Dave Meehan/The Irish Times

Pope Francis was “taken aback” and “shocked” upon hearing about Mother and Baby homes during a meeting in Dublin with abuse survivors on Saturday and had “no idea” what a Magdalene laundry was, according to one of the survivors present.

Another survivor present, Marie Collins, who resigned from the Vatican’s Commission for the Protection of Minors last year, said on Sunday it was a meeting “that did have positives to it”.

She said she raised issues surrounding accountability in the Church and safeguarding measures for children and specifically asked Pope Francis why the church is continuing its practice of allowing disgraced church leaders resign instead of being fired.

“I made the point to him that they’re allowed to resign which means that there’s no outward sign of any finding of guilt against them and if they are found guilty in some sort of church tribunal, that they should be made known and he agreed, that it should be more transparent,” she said.

“He seemed to give that idea some traction and said he would be looking at that. But as far as putting in place something new, he didn’t seem to be inclined in that direction.”

Ms Collins said she was satisfied with the meeting overall and that the survivors had “plenty of time to say what they wanted to say”.

“I got to put across the points I wanted to put to him and say what I wanted to say. I got the answers from him, not necessarily what I wanted to hear but that’s not the point...I like the fact that all the people there were people who were strong advocates of particular areas of abuse and institutions,” she added.

The pontiff met eight survivors of clerical abuse in Ireland and people who spent time in industrial schools, seminaries and Mother and Baby homes, in the Papal Nuncio’s residence on the Navan Road on Saturday for around 90 minutes.

Among the survivors present were Paul Redmond and Clodagh Malone, who were born in Mother and Baby homes and have campaigned for justice for mothers who were forced by such institutions to give up their children for adoption.

“Clodagh explained to him that the nuns in Ireland who ran the Mother and Baby homes had put a lot of pressure on women never to look for their children after they lost them and told them all sorts of lies, that it was a mortal sin, they’d burn in hell, it was illegal...He was quite taken aback by that, shocked,” Mr Redmond told RTÉ Radio 1 on Sunday.

“We asked him would he say something at the mass today (Sunday) to lift that burden so to speak off elderly members of our community, who have been suffering in silence for generations, particularly down the country where they have quite often been isolated and he agreed to do that. It was a huge boost to us.”

Mr Redmond said Pope Francis “listened very well” to the survivors but “had no idea” what exactly a Magdalene laundry was.

“He literally had no idea. It ended up with me giving him a three or four minute crash course through his translator as to the institutions of Ireland,” Mr Redmond added.

The eight survivors handed a letter to the pope, in English and in Spanish, telling him that an estimated 100,000 mothers were forcibly separated from their babies in Ireland.

Bernadette Fahy, who spent much of her childhood in the Goldenbridge Orphanage, said: “I spoke to him (Pope Francis) about industrial schools and Magdalene laundries, both of which he appeared to know nothing about.

“He hadn’t ever heard the concept before, that was quite shocking to me.

“He was very good at actually getting to the root of that, what was that, what were they, he had no idea of the purpose of them.”

Ms Fahy said she asked the pope to give a moment of silence during mass in the Phoenix Park on Sunday for those who had grown up in industrial schools and laundries.

“He asked his translator to note that,” Ms Fahy said. “I don’t know what he will do with that.

“The main thing was, had it not been mentioned yesterday (Saturday), he may well have left the country and not actually known what an industrial school or Magdalene laundry was. I found it shocking. I think all of us were shocked.

“Indeed, he didn’t know about Mother and Baby homes either. The only thing he seemed to know about was clerical sexual abuse.”

Fr Patrick McCafferty, who was abused as a seminarian in Wexford and last week told his Belfast congregation that Pope Francis should cancel his visit to Ireland because of the issue of clerical sex abuse, was also present at the meeting.

A statement released by his diocese outlined what he said to the pope. “The current crisis has been going on for over 30 years now,” he said. “The agony is prolonged intolerably by the continuous ‘drip drip’ of disturbing revelations. A very focused and proactive approach to this crisis in the Universal Church is very necessary for healing to occur - and in many instances - for it to even begin.

“Failure to grapple with this sin and crime is hindering the Church’s capacity to bear witness in other vital areas, such as the right to life, the importance of marriage and the joy of family life. Help is available to you, Holy Father, as the leader of the coalition of the willing. Progress has been made and, together, we can continue to the next stage.

“The reality also, that must be honestly considered and faced, is that this issue is endemic, outside as well as within, the Church”.

He also said “transparency, full cooperation and accountability at the highest level, are of paramount importance in restoring the sacred trust that has been violated.”

In addition he said: “There are also some priests, Holy Father, who have known the pain of false accusations and sometimes their distress too has been compounded by how they were treated by those with a duty of pastoral care towards them. We must be mindful of them too. They also need to be consoled.”

Fr McCafferty said too that those who cover up sin and abuse and or who “cause devastation by their incompetence in dealing with such matters, need to face proper and just penalties - no matter what office or position they occupy in the Church.”

He continued: “For many, such is the depth of hurt and the extent of the harm inflicted, that nothing will ever suffice to make amends. I want to mention to you, for your particular solicitude, a group of survivors to whom I am close - who were abused and cruelly treated in Church-run institutions - orphanages and reformatory schools and who, in the North of Ireland, continue to be denied justice and redress by civil authorities”.

Dublin city councillor Damian O’Farrell, a survivor of clerical sex abuse who was also at the meeting, said it was his impression that the pope “didn’t really know much” about the Magdalene laundries, Mother and Baby homes and industrial schools. He said the meeting was “robust and respectful”.

“I was very satisfied with him, he worked very hard. It was an hour and a half and he listened to all those people and recounted back. He made himself understand, his interpreter made notes. He worked really hard,” Cllr O’Farrell said.

The pope was presented with a copy of Mr Redmond’s book, The Adoption Machine, as well as a blue baby shoe with black mourning ribbon on behalf of the ‘Baby Shoes Remember’ project, to symbolise the innocence of all the babies and children who have suffered at the hands of the Catholic Church both in institutions and as victims of sexual abuse by clerics.

The pope gave a gift of a commemorative medal of the World Meeting of Families event to all the survivors.