From fake news to hopes of faith news at Croke Park

Patrick Freyne: Pope Francis receives families, gets selfie with a child and gives a speech with a mother-in-law joke

During the World Meeting of Families event in Croke Park, Alison Nevin, aged 12 from Carrickmines, Dublin, asked for a selfie. 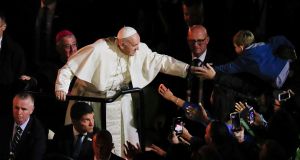 Pope Francis waves as he leaves after attending the Festival of Families at Croke Park during his visit to Dublin on Saturday. Photograph: Reuters 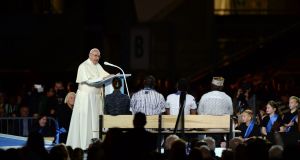 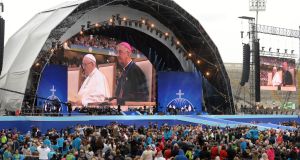 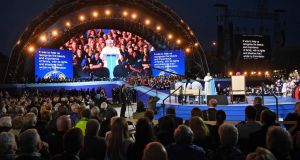 Pope Francis speaks at the Croke Park stadium for the Festival of Families in Dublin on Saturday. Photograph: EPA

Martin Taylor is among a large group of volunteers who have been recruited to circle the pitch in Croke Park waving flags from around the world as an explosion of trad musicians, dancers and singers perform from the stage. It’s quite an opening spectacle.

Taylor, from the North Strand in Dublin, once had what he calls “the 999 God”. When he prayed he would say, “I’m in trouble help me out.”

A friend suggested he go back to the prayers of his childhood and in reciting them he found he related to them in a completely new way.

“Now he has a deep sense of faith and has returned to the church. Like others of his generation he experienced clerical violence when he was in school, he says, “but I understood that that wasn’t coming from the Holy Spirit.”

During the last papal visit he was dealing with the darkness of addiction, he says. It was a bit of a turning point in his life.

What flag was he given for the performance? He laughs. “It just so happens I got the Vatican. ”

He arrived at around 7.30pm on a little open top vehicle, to the improbable sound of Patrick Bergin singing Leonard Cohen’s ‘Anthem’.

He receives families, gets a selfie with a child and gives a speech about family harmony which includes a call and response bit (he gets the crowd to chant “please” “thank you” “sorry”) and at least one mother-in-law joke.

Before the show Sister Maura Walsh and Sister Monica Boggan are having a great time meeting old friends and other members of their order. They’re from the enclosed Redemptoristine order in Drumcondra and they made the bread that will be used at Sunday’s Mass in the Phoenix Park.

They usually only leave their life of contemplation to go to the doctor, dentist or to attend courses. “Our main calling is to pray for the world,” explains Sister Monica who is 35. She laughs. “But we don’t feel like we miss much, we can hear all the concerts here.”

They have a way with a soundbite. “There’s a lot of talk about ‘fake news’,” says Sister Maura. “Hopefully this will teach people about ‘faith news’.”

“We hope people will switch onto God and switch off their iPhones and laptops,” says Sister Monica.

More seriously Sister Maura adds: “There’s a wounded and fragmented sense in Ireland now... We need to stay united with the pain and the hurt.”

“I hope there’ll be a renewal in the spirit of the church” says Sister Monica. “And I hope that many people come back to the church.”

Daniel O’Donnell emerges at the side of the stage at one point before the performance begins and is immediately swamped by the faithful. “Now there’s the real pope,” says a man in a yellow jacket approvingly.

“I think I scared him a bit,” says Niamh Shorthall, after getting a photo with him. She works with the religious publisher Veritas and has spent the week selling memorabilia and books out in the RDS with her friend Emma Herlihy.

Herlihy is worn out, she says, after a week hosting book signing events for people like the pro-LGBT priest James Martin and selling Pope-themed t-shirts, mugs, pens and a special “Pope chair” designed for easy transportation to the Phoenix Park. “You must have heard of our Pope chair?”

Sister Michelle Escuadra of the Poor Clares, here with permission from her Mother Abbess, is endearingly confused about why people keep taking her photograph.

“I think it’s because you’ve got an ‘I love Pope Francis’ baseball cap over your habit,” I say, and her friend Sheila Maglasang, who like Sister Michelle is from the Philippines, cracks up laughing. That hadn’t occurred to them. Why are they here?

“We would never see the Pope otherwise,” says Sheila. “The Philippines is a long way from the Vatican.”

Some women kindly show me their brochure outlining what acts are playing. One of them, Tyrone woman Anne Duffy-Feeney, was 14 when a Pope was last in Ireland and she had to stay home and babysit. She has a deep faith.

Francis’s visit, she says, “is fundamentally important because of the state Ireland is in at the moment. It’s in crisis.” She hopes he sends the nation “in the right direction.”

What direction? “[Some] Catholics want the church to adapt to the way the world is now. But why is the world the way it is? Because man has change it. We want to practice the will of God and not the will of man... It’s God’s church, not man’s.”

David McDonnell, a farmer from Shanagolden in Limerick, is here with three generations of his family, including his wife and four young children. “I think it’s very symbolically important. The church isn’t in great shape at the moment.”

Why isn’t it in great shape? “They haven’t dealt well enough with the scandals, the clerical abuse.”

He has friends who are priests and has friends who are atheists, he says. He doesn’t like how former President Mary McAleese criticised the church, but he would like to see it adapt and change with more involvement from the laity and more of a focus on families and their struggles in the modern world.

He has always had strong faith, he says. It never lapsed. “I’m from a small rural community and it’s very much part the local fabric, like the GAA club.”

Indeed, he was here a week before to support Limerick in the All Ireland final. “You support your club,” he says and laughs. “This is just a much bigger club.”

Caroline O’Leary is here as a volunteer sign language interpreter. She works with The Deaf Village. “I’m the child of deaf parents. Back in 1979 my dad [Patrick] was instrumental in making sure deaf community were included in the Pope’s Mass in Cabra. ” She was 11 then, but she was in hospital. Her dad brought her out the next day and carried her up to see the altar where the pope had been.

And she has faith? “I do now,” she says and laughs. “As a single mam with three kids… sometimes all that’s left is prayer.”

Most of her friends are angry with the church and she understands their anger. “Working as sign language interpreters we’ve worked a lot with the Redress Board. We’ve interpreted and we’ve borne witness to our parents’ abuse that they would have experienced … I know the Ryan report.”

She wants a kinder more inclusive church, one that includes gay people and all sorts of families.

As Nathan Carter performs ‘Everybody Hurts’ surrounded by children signing the words, she says, “I’m for a church for change.”