Media review: how visit by Pope Francis was reported around the world 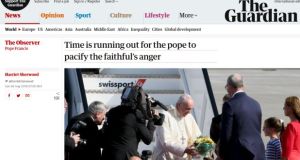 The Pope’s visit to Ireland, the first since Pope John Paul II’s overwhelming reception in 1979, would always have made global headlines.

However, against the background of the abuse scandals and Ireland’s recent referendums on marriage equality and abortion, the visit has become a symbol of the Catholic Church’s declining influence, as well as Ireland’s transformation into a modern, progressive state.

Interestingly, much of the media coverage in the US has focused on Taoiseach Leo Varadkar’s personal life, taking his sexuality as an indication of the changes in Ireland. Each headline below links to the full report.

The last time a pope visited Ireland, homosexuality was a crime. Now the Irish prime minister is gay: Varadkar is a distinct example of how what was once an overwhelmingly white, Catholic nation is now increasingly diverse and its laws increasingly secular. Ireland is the first country to have legalized same-sex marriage through a popular vote, and this year, the country repealed its restrictive abortion ban. Many see the country’s new policies and shifting demographics as evidence that the Irish are moving further and further away from the Catholic Church.

The day before his arrival, Varadkar said the church previously “had too much of a dominant place in our society.”

And in his remarks in front of the pope Saturday, the prime minister said the Irish have “voted in our Parliament and by referendum to modernize our laws.”

In Ireland, Pope Francis Finds a Country Transformed and a Church in Tatters:  As recently as a few weeks ago, the pope’s visit to Ireland mostly promised an awkward encounter in an estranged relationship. Since the last papal visit - by John Paul II in 1979 - Ireland, once a cornerstone of the church, has abandoned its teachings by legalizing divorce and gay marriage. The prime minister is gay, and just a few months ago, Ireland voted to lift a ban on abortion.

But the sex abuse scandal has lent increasing urgency to the pope’s visit, casting a shadow beyond Ireland to the heart of the Vatican, where it threatens to tarnish the legacy and remaining influence of Pope Francis.

In Pope Francis’ hometown of Buenos Aires, the news coverage focused on the protests around Dublin.

The streets of Dublin, scene of protests against the Pope’s visit: The Pope is not welcome by everyone in the capital of Ireland. His arrival sparked a lively debate on the streets of Dublin about the role of the Church in that country, greatly affected by abuses committed by priests or nuns.

While thousands of supporters of the pontiff cheered him on his way with the Popemobile through the centre of the Irish capital, other inhabitants openly showed their discontent with the presence of Francisco.

Coverage in the European and African press largely focused on the child abuse scandals, and the reaction to Pope Francis’s attempts to address it during the visit.

Time is running out for the pope to pacify the faithful’s anger: When Pope Francis ascends the steps of his plane at Dublin airport on Sunday evening at the end of his 36-hour trip to Ireland, even he - the people’s pontiff, the champion of the poor - might feel a sense of relief on entering the cocoon of Aer Lingus’s business class.

He will leave a country in which the wounds of clerical abuse are still raw, and where visceral anger is building rather than fading. On Saturday, Francis again acknowledged a “grave scandal” and “repugnant crimes”. But the question for survivors and increasing numbers of the faithful is: what is he going to do about it?

Pope shares ‘pain and shame’ at Church’s failings over Irish abuse during historic visit: Pope Francis delivered an address and heard five testimonies by families from Ireland, Canada, India, Iraq, and Africa about the importance of family in the modern age.

Earlier, as he left Dublin Castle to drive through the city in a blue Skoda the Pope was greeted by a group of advocates holding a banner calling for redress for victims.

Other placards urged him not to forget abuse survivors. His visit has drawn comparisons to an earlier visit by Pope John Paul II in 1979, at which 2.7m people greeted him and more than a million attended a Mass in the city’s Phoenix Park.

The figures for this year’s event are not yet know, but the pavement behind the barriers outside the castle was not full and many of those watching were there to protest.

The Pope: ‘The Church has failed’: Ireland is a country deeply affected by this kind of scandal. And Bergoglio was the first Pope to set foot here after the four government reports that from 2005 to 2011 reveal decades of sexual violence and abuse on thousands of minors in Catholic institutions. For this reason his journey and for this between today and tomorrow the pope will meet in private form some victims of pedophile priests.

And with an exchange of talks with the prime minister, Pope Francis reiterated “the incentive to the efforts of the ecclesial authorities to remedy past mistakes and adopt stringent rules to ensure that they do not happen again.” Eliminate this scourge in the Church. that recognize the serious scandal caused in Ireland by child abuse by Church members charged with protecting and educating them."

The once “most catholic country” does not welcome the Pope: The reason for this is not the secularization that has been going on everywhere in Europe for decades, which has brought the Irish at a rapid pace divorce, gay marriage and, most recently, liberalization of the strict prohibition of abortion . In 1961, 95 percent of the Irish still defined themselves as devout Catholics, in 2016 it was 78 percent. The reason is the church itself. It left deep scars in what was once the “most Catholic land on earth,” as the Irish used to praise themselves.

Tuam, Magdalene Laundries, Maynooth are terms that trigger emotions among the people of the Green Island. Places that stand for sexual abuse, for the exploitation of “fallen women”, for the mistreatment of illegitimate children. They trigger shame, fear, despair and a still growing anger.

Pedophilia scandals: in Ireland, the pope evokes his “shame” at the “failure” of the Church: Dublin did not adorn itself with the colours - yellow and white - of the Vatican, and Dubliners did not wait for the pope as he passed.

Francis’s arrival in Ireland on Saturday, August 25, for a thirty-two-hour visit, did not provoke fervour beyond the places that marked the stages: at the Sainte-Marie cathedral, in a centre of homeless and, in the evening, at Croke Park Stadium, where tens of thousands of people were present for a “family celebration”, as part of the World Family Meeting, organized every three years by the Catholic Church, which takes place this year in Dublin.

Twenty-five years of revelations about multiple turpitudes (abuse, sexual violence, confiscation of child-mother children) perpetrated for decades against children, youth and women in Church-run institutions, or in the parishes by priests and religious, have done their work and dethroned it from its rank of moral authority in the country.

Pope arrives in Ireland as abuse crises rage on:  More than three-quarters of the Irish population flocked to see Pope John Paul II in 1979 at a time when divorce and contraception were illegal.

Today, Ireland is no longer staunchly Catholic and over the past three years, voters have approved abortion and gay marriage in referendums, defying the will of the Church.

Numbers lining the streets or joining Francis in prayer are expected to be about a quarter of the 2.7 million who greeted John Paul II, marking how the rock that was once Irish Catholicism has eroded since child abuse cases came to light in the 1990s.

The 500,000 tickets issued for the mass were quickly snapped up, although an unknown number have been booked by a boycott group called “Say Nope To The Pope” which encouraged protesters to order tickets and not use them.

Still, pictures of the pope were on the front pages of every newspaper on Saturday and there was excitement among some on Dublin’s quiet early morning streets as the city centre prepared to go on lockdown amid tight security.