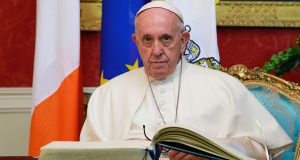 Pope Francis said he was ‘very conscious’ of the circumstances of ‘our most vulnerable brothers and sisters’. Photograph: Nick Bradshaw/The Irish Times 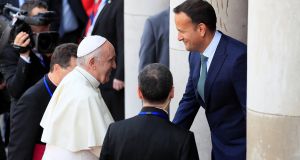 Pope Francis is greeted by Taoiseach Leo Varadkar at Dublin Castle during his visit to Dublin. Photograph: Gonzalo Fuentes/Reuters. 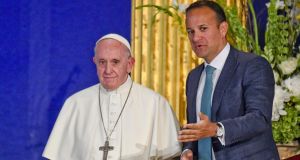 Pope Francis, in the first speech of his visit to Ireland, has recognised how the Church’s failure to address the “repugnant crimes” of clerical sexual abuse “remains a source of pain and shame” for Irish Catholics.

Speaking at Dublin Castle almost two hours after landing in Ireland, the pontiff in addressing the scandal that has damaged the Church’s standing since the last visit of a pope almost four decades ago, said he was “very conscious” of the circumstances of “our most vulnerable brothers and sisters.”

Speaking after a speech by the Taoiseach, the pope specifically made reference to “women who in the past have endured particularly difficult situations” - a veiled reference to the treatment of Irish women in the Magdalene Laundries and other Church-run institutions.

“With regard to the most vulnerable, I cannot fail to acknowledge the grave scandal caused in Ireland by the abuse of young people by members of the Church charged with responsibility for their protection and education,” Francis, speaking in Italian, told an audience that included Taoiseach Leo Varadkar.

“The failure of ecclesiastical authorities - bishops, religious superiors, priests and others - adequately to address these repugnant crimes has rightly given rise to outrage and remains a source of pain and shame for the Catholic community. I myself share these sentiments.”

Francis referred to the past remarks of Pope Benedict in a letter to Irish Catholics saying that he “spared no words in recognising both the gravity of the situation” and in demanding that “truly evangelical, just and effective” measures be taken in response “to this betrayal of trust.”

“His frank and decisive intervention continues to serve as an incentive for the efforts of the Church’s leadership both to remedy past mistakes and to adopt stringent norms meant to ensure that they do not happen again,” said Pope Francis.

“Each child is in fact a precious gift of God, to be cherished, encouraged to develop his or her gifts, and guided to spiritual maturity and human flourishing.”

While recognising the Church’s failures in the clerical abuse scandal, the Pope noted too that the Church had “past and present, played a role in promoting the welfare of children that cannot be obscured.”

“It is my hope that the gravity of the abuse scandals, which have cast light on the failings of many, will serve to emphasise the importance of the protection of minors and vulnerable adults on the part of society as a whole,” he said.

“In this regard, all of us are aware of how urgent it is to provide our young people with wise guidance and sound values in their journey to maturity.”

The Vatican was roundly criticised on the eve of the pontiff’s visit by clerical sex abuse survivors and campaigners for his failure to follow his words with actions and reforms in the Catholic Church to identify abusers - and the superiors who protected them - and help their victims come forward and find justice.

Three months after Ireland voted to legalise abortion, Pope Francis condemned “a materialistic ‘throwaway culture’” questioning whether it has made people “increasingly indifferent to the poor and to the most defenceless members of our human family, including the unborn, deprived of the very right to life.”

Pope Francis spoke about how the international community “followed attentively” the events in Northern Ireland that led to the signing of the Belfast Agreement on Good Friday 20 years ago.

“The Irish Government, in union with the political, religious and civil leaders of Northern Ireland and the British government, and with the support of other world leaders, created a dynamic context for the peaceful settlement of a conflict that caused untold pain on both sides,” he said at Dublin Castle.

“We can give thanks for the two decades of peace that followed this historic agreement, while expressing firm hope that the peace process will overcome every remaining obstacle and help give birth to a future of harmony, reconciliation and mutual trust.”

Pope Francis also said, in an off-script comment, that the words said to him earlier by the Minister for Children and Youth Affairs Katherine Zappone “still echo in my heart.” He thanked her for her words.

Vatican sources later confirmed that she raised the issue of mother-and-baby homes with him , in particular the scandal of Tuam, where historian Catherine Corless uncovered proof of more than 700 babies having been buried in a septic tank.

Visiting Ireland to conclude the World Meeting of Families, the once-every-three-year conference sponsored by the Vatican, Francis spoke about the importance of recovering “the sense of being a true family of peoples” in every instance of political and social life, referencing the Irish peace process.

Among the members of the audience in attendance was former US senator George Mitchell who brokered the Good Friday Agreement.

He paid tribute to the efforts to build peace, urging the Irish “never to lose hope or the courage to persevere in the moral imperative to be peacemakers, reconcilers and guardians of one another.”

“Here in Ireland, this challenge has a special resonance, in light of the long conflict that separated brothers and sisters of a single family,” he said.

In wide-ranging remarks that touched on relations between the Vatican and Ireland, the pope referred not just to the Holy See being among the first international institutions to recognise the Irish Free State almost a century ago but to the more recent tensions between Irish political figures and the Vatican over the abuse scandal.

The Vatican’s recognition of the Irish state “signalled the beginning of many years of dynamic cooperation and harmony, with only an occasional cloud on the horizon.”

“Recently intensive endeavour and goodwill on both sides have contributed significantly to a promising renewal of those friendly relations for the mutual benefit of all,” he said.

He spoke about the Christian tradition in Ireland dating back more than a millennium and a half to Palladius and Patrick and how it “found a home in Ireland and became an integral part of Irish life and culture.”

“Today as in the past, the men and women who live in this country strive to enrich the life of the nation with the wisdom born of their faith,” he said. “Even in Ireland’s darkest hours, they found in that faith a source of courage and commitment needed to forge a future of freedom and dignity, justice and solidarity.

“The Christian message has been an integral part of that experience, and has shaped the language, thought and culture of people on this island.”