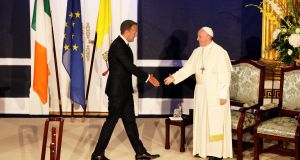 The time has come to build a “new” and “more mature” relationship between the Catholic Church and the Irish State - “a new covenant for the 21st century” - Taoiseach Leo Varadkar has told Pope Francis on his visit to Ireland.

Welcoming Francis two hours after he arrived in Ireland, Mr Varadkar, speaking alongside the Pope at Dublin Castle, said he hoped the pontiff’s visit - the first by a pope to Ireland in 39 years - “marks the opening of a new chapter in the relationship between Ireland and the Catholic Church.”

“Building on our intertwined history, and learning from our shared mistakes and responsibilities, it can be one in which religion is no longer at the centre of our society, but one in which it continues to have an important place,” he said to several hundred dignitaries from Irish political, civic and religious life in St Patrick’s Hall at Dublin Castle, addressing the audience before the pope spoke.

Referring to the “dark aspects” of the Catholic Church’s history, he described the Church-run institutions where Irish people were abused and mistreated - the Magdalene Laundries, Mother and Baby Homes, industrial schools - and through illegal adoptions and clerical child abuse as “stains on our State, our society and also the Catholic Church.”

These were “people kept in dark corners, behind closed doors, cries for help that went unheard,” Mr Varadkar said, speaking on a stage next to the Pope.

“Wounds are still open and there is much to be done to bring about justice and truth and healing for victims and survivors. Holy Father, I ask that you use your office and influence to ensure this is done here in Ireland and also around the world.”

The Taoiseach said we have all listened to the “heart-breaking stories” of clerical sex abuse revealed in Pennsylvania, as exposed in a grand jury report earlier this month. He described the abuse as “unspeakable crimes perpetrated by people within the Catholic Church, and then obscured to protect the institution. It is a story that was all too tragically familiar to people in Ireland.”

Addressing the Church’s much-criticised handling of clerical sex abuse, the Taoiseach said there “can only be zero tolerance for those who abuse innocent children or who facilitate the abuse.”

“We must now ensure that from words flow actions,” Mr Varadkar told the pontiff. “Above all, Holy Father, we ask to you to listen to the victims and to the survivors,” and that he do so with the “humility and compassion” that he embodies as pontiff.

He acknowledged the mistakes of the Church and State in the past, saying: “At times in the past we have failed.”

Among the audience at Dublin Castle were Archbishop Eamon Martin of Armagh, the Primate of All-Ireland, and Archbishop Diarmuid Martin of Dublin.

On the other side of the aisle were political leaders led by Tánaiste and Minister for Foreign Affairs Simon Coveney and leaders of opposition parties, Micheál Martin of Fianna Fáil and Brendan Howlin of the Labour Party. Also in the front row among the politicians were former Irish president Mary McAleese, a vocal critic of the Church’s handling of clerical sexual abuse and attitude towards gay and lesbian people.

The Taoiseach, referring to the recent remarks of the Catholic Bishop of Limerick Brendan Leahy, said there were “dark aspects” to the Catholic Church’s history.

“We think of the words of the Psalm which tell us that ‘children are a heritage from the Lord’ and we remember the way the failures of Church and State and wider society and how they created a bitter and broken heritage for so many people, leaving a legacy of pain and suffering,” he said.

‘Shared history of sorrow and shame’

“This is a shared history of sorrow and shame. In place of Christian charity, forgiveness and compassion, far too often there was judgement, severity and cruelty, in particular, towards women and children and those on the margins.”

Mr Varadkar spoke about “the Ireland of the 21st century” as being “a very different place today” than the one we had in the past, telling the Pope: “As you can see from the people here in front of you, it is increasingly diverse.”

He characterised modern Ireland as more secular and more diverse, noting that one in six Irish were not born in Ireland and that more and more people adhere to other faiths or subscribe to no religion.

Referring to a more liberal and progressive Ireland since the last papal visit almost four decades ago, the Taoiseach referred to the recent referendums legalising same-sex marriage and abortion.

“We have voted in our parliament and by referendum to modernise our laws - understanding that marriages don’t always work, that women should make their own decisions, and that families come in many different wonderful forms including those headed by a grandparent, lone parent or same-sex partners or parents who are divorced and remarried,” said Mr Varadkar, Ireland’s first gay Taoiseach.

Referring to the new relationship between Church and State, the Taoiseach said that “new chapter” can be one “with greater diversity and choice when it comes to the patronage of our schools, and where publicly-funded hospitals are imbued with a civic and scientific ethos”.

Speaking at one point in Irish, the Fine Gael leader, who was born in the year of the last papal visit, told the pontiff that his visit has “caused many of us to reflect further and more deeply on the relationship between Ireland and the Roman Catholic Church, a faith brought to Ireland centuries ago.”

“Ireland is a different country than it was 39 years ago. Modern Ireland is still a country with faith and spirit and values,” he said.

“Family, community, enterprise, social justice, diversity, openness and internationalism, equality before the law and individual liberty - these values describe the Republic we aspire to be.”

In a private 10 minute meeting with the pope at Dublin Castle, the Taoiseach spoke about the many Irish people who felt excluded from the Catholic Church because of “legacy issues” such as clerical sex abuse and the Church’s handling of it.

“The Taoiseach said to the pope that there are huge numbers of people here who have faith in their heart but who feel excluded and alienated from the Church because of what happened,” a spokesman for Mr Varadkar said.

The Taoiseach said these people want to believe again, and want to be called back to the Church, according to a spokesman.

Pope Francis thanked the Taoiseach for the work the Government and State authorities had put into the visit, and for the warm welcome he has received.

The Taoiseach thanked the pope for his statements on climate change, accepting refugees and international development, and added this made it easier for politicians to make the right decisions.