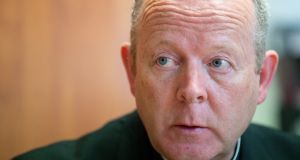 Archbishop Eamon Martin: “I would go so far to say the factionalism that has emerged in the whole Brexit debate has become dangerous.” File photograph: Tom Honan

Northern Ireland Catholics have been left out of the Brexit debate in the UK, Archbishop of Armagh and Primate of All Ireland Eamon Martin has said. “They feel disempowered” and “disenfranchised”, he said.

“The voice of those in the North who voted for Remain, which was a majority voice, that voice has not been represented in the Westminster debates.

He said that voice was represented in Europe through the Irish Government and to an extent through MEPs. “But whether that makes its way onto the streets of Belfast, Armagh, Derry, Dungannon is another question.”

Speaking personally, he said: “It’s hard to beat your own public representatives.”

He was speaking to The Irish Times in Maynooth on Tuesday, where the Catholic bishops are currently holding their autumn meeting.

People in the North have become increasingly “frustrated”, he said. “ They simply do not know what’s happening” .

He said it was at this stage “ high level failure of the democratic system”.

“I would go so far to say the factionalism that has emerged in the whole Brexit debate has become dangerous,” he added.

He felt the integrity of parliamentary democracy had been brought into question. “If you create that vacuum there will be an increase in sympathy with and even support for violent and aggressive activity. The danger then is that our constitutional politicians, for example, ... that they try to be as hard line as the dissidents. It pushes people towards the corners.”

John Hume “sold to moderate nationalists the idea that we could see ourselves in the context of Europe “ and “was able to lift us out of any kind of narrow-minded nationalism, in the worst sense of that term, where we were able to see ourselves in a broader canvas.”

The openness had been “progressively reversed over the last few years,” he said. He had become in “ increasingly alarmed” at the way the people have “found themselves going back into the trenches, going back into their corners, eyeballing each other from across the room”.

He had seen an “alarming increase” in sectarianism, hate speech and the threat of violence over the summer. The “peace process was always fragile, it was fledgling, it needed space to grow and develop. The last few years have progressively shut it down, in my view,” he said.

“ In some communities across the North there has been a rise in dissident activity and, I don’t want to exaggerate this, there has also has been an increase in sympathy with dissident voices on the ground.”

On recent events at Ballyconnell Co Cavan, where Quinn Industrial Holdings executive Kevin Lunney was abducted and savagely beaten two weeks ago, Archbishop Martin said priests there had given “admirable leadership in recent weeks and a very strong public voice for the communities. Listening to them you do get a sense of intimidation and fear.

“I’m no stranger to that. We grew up in the North with an atmosphere of intimidation and fear where people and communities were afraid to speak up about violent people in their midst.”

He appreciated “the role the local church has played in that. It is a good example of where the priests on the ground do try to speak up on behalf of the people,” he said.

However he was “ frightened by people saying that they didn’t feel the police service north of the border or an Garda Síochána had been taking this seriously.”

It was “outrageous what Kevin Lunney went through and indeed what we understand other people have been living under, that shadow of intimidation and fear.”

On the planned direct provision centre at Oughterard Co Galway, not now going ahead, he said Ireland’s Catholic had “consistently called out the direct provision system.” There was “no doubt this particular incident in Oughterard shows us the failure of the current approach,” he said.

He recalled how “someone said to me during the summer `is it possible the direct provision centres are the Magdalene Laundries of the future?’ We in the Church, through very bitter experience have had to accept our failures of the past which were failures by the church and failures by the state. There are enough alarm bells ringing today to suggest that we need to take a fresh look at this.”