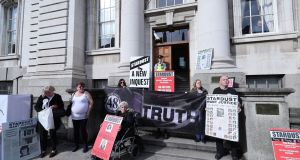 Friends and relatives of those killed in the 1981 Stardust fire bring their case for a new inquest to the Attorney General’s office in Dublin on Tuesday. Photograph: Niall Carson/PA Wire

Relatives of the victims of the Stardust tragedy have been “fobbed off” by the Attorney General, following a request for a new inquest into the deadly fire, campaigners claim.

The fire at the Stardust nightclub, in Artane, north Dublin, on the night of February 13th/14th 1981, remains the worst fire disaster in the history of the State. It occurred during a disco on Valentine’s Day, and killed 48 young people and injured over 200 others, primarily from Dublin’s northside.

In April, the Stardust Victims Committee filed a submission to the AG, Séamus Woulfe, the Government’s legal advisor, formally requesting a fresh inquest into the disaster.

Families of the victims said the submission contained new evidence relating to the timing and location of the fire.

Speaking on Tuesday outside the Office of the Attorney General, campaigner Antoinette Keegan said on four occasions relatives were given a date for a decision on the request, only for it to be postponed.

Two of Ms Keegans sisters, Mary (19) and Martina (16), were killed in the fire. On Tuesday she delivered a letter to Mr Woulfe, on behalf of the campaigners, criticising the delays.

Previously Taoiseach Leo Varadkar and Minister for Justice Charlie Flanagan played down any suggestions a new inquest would be opened into the fire.

Inquests were held in 1982, returning explanations as to the causes of death but no verdicts.

A 1981 tribunal of inquiry had found “the most probable explanation of the fire” was arson. That finding was formally removed from the public record in 2009 following a review of evidence.

Investigations into the fire showed that a number of escape routes from the dance hall were blocked as emergency doors were locked by chains.

Speaking on Tuesday, former Sinn Féin MEP for Dublin Lynn Boylan said repeated delays on the appeal for a new inquest were unacceptable.

“I’ve witnessed over the course of the summer the distress that they [families] have gone through, the sleepless nights, preparing themselves for a decision only for it to be postponed again,” she said.

People Before Profit TD Richard Boyd Barrett called for Mr Woulfe to make “the right decision” on Wednesday, to open a new inquest, and “finally lift the lid on this tragedy”.