UK government promised Ireland, EU in 2017 that there would be no hard border – Varadkar 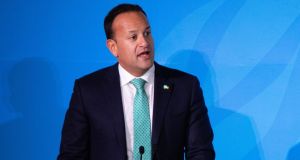 Taoiseach Leo Varadkar: ‘We expect the British government to honour that commitment made in the good faith in the withdrawal agreement.’ Photograph: Kevin Hagen/Bloomberg

Taoiseach Leo Varadkar welcomed comments by British prime minister Boris Johnson who he said had “disowned and distanced himself from” leaked proposals suggesting customs posts be placed on both sides of the Border.

“Had he not in my view it would have been hard evidence of bad faith on behalf of the British government”, Mr Varadkar said in the Dáil on Tuesday.

He told Fianna Fáil leader Micheál Martin that while he was aware of the existence of these “non papers” the UK provided them to the EU taskforce on the basis that they be kept confidential and not shared with member states and they were not shared.

He said the UK government in December 2017 promised Ireland and the EU that there would be no hard border and no physical infrastructure or associated controls or check.

“And we expect the British government to honour that commitment made in good faith in the withdrawal agreement.”

People in Ireland did not want a customs border between north and south and the Government had only ever envisaged checks in the context of no deal.

No British government should seek to impose customs posts between Northern Ireland and the Republic of Ireland against the will of both communities, he added.

Business in Northern Ireland had said the British government was not listening to businesses in the North, some describing the proposals as “an absolute disgrace”.

The Taoiseach stressed that “no British government should try to impose on Ireland a solution opposed by people north and south”.

And he said that anyone in the British establishment who thinks this is in any way a good idea has not been listening to the people, farmers and businesses in the North.

Mr Martin said that Mr Johnson might dismiss the “non-papers” but he said “he does not want as part of an exit deal any provision which will ensure and guarantee that Northern Ireland remains in the customs union.

The Taoiseach agreed with Mr Martin’s assessment that Mr Johnson wanted the UK to leave the EU whole and entire.

He believed if the alternatives from the UK are similar to what was contained in these non-papers, “it looks very like a hard border to me”.

But he said he had explained to Mr Johnson there was a reason they came up with the deal that they did, after two years of negotiations.

The backstop provides for a single customs territory. It does not provide for Britain or Northern Ireland to remain in the EU customs union.

That is why the backstop is the best solution because it avoids customs posts.

“I explained to him that we spent two years going up and down all these rabbit holes. Why did we come up where we did, because we needed a solution that avoided customs posts,” Mr Varadkar said.

He said border checks imposed by anybody in any context, regardless of whether there is a deal or not “are unacceptable and threaten the peace and stability of this island”.