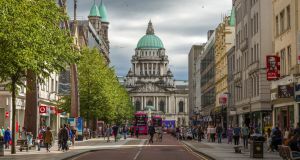 One of the frustrating and revealing aspects of Brexit is the way it has shown a lack of real interest in the North from some British politicians. The confusion over yesterday’s leaked proposals to place custom posts along the Border is just one sign of this. Another was the way Boris Johnson had compared the Border between Ireland and Northern Ireland to the boundaries of London’s congestion charge zone.

This level of ignorance is a pity because the reality is that Northern Ireland is one of the poorest economic regions of the UK, falls well behind the level and rate of growth of Ireland, and continues to suffer social, political and economic rigidities. Social divisions are being mended all too slowly, local politics at Stormont is inadequate, and the economy remains embarrassingly overdependent on government spending.

Brexit has shone a light on many of these issues and has illuminated the lack of appreciation many in Westminster have for Northern Ireland in particular, and Irish history in general. Arguably, a film (Titanic) and TV series (Game of Thrones) have done more for Northern Ireland’s fortunes than its local and London-based leaders.

In particular, Theresa May’s Brexit strategy was fatally snared by a shoddy understanding of the complexities presented by the border between Northern Ireland and the Republic. Indeed, there is a risk for Britain that Brexit is replaying the divisions and debilitating bitterness of the Ireland’s separation from Britain in the 1921 Anglo-Irish treaty.

Yet, while there have been very few if any winners in the Brexit process so far, it does represent a valuable opportunity for London, Dublin and Brussels to recognise that Northern Ireland needs a second wind in terms of its socioeconomic development. Irish America can add an important voice of support here. Northern Ireland should not be parked as a political issue but should be cultivated economically and socially.

A provocative but potentially fruitful suggestion is that a portion of Britain’s Brexit exit “settlement” to the European Union be set aside as the basis or seed capital for a Marshall Plan-type fund for Northern Ireland. The allocation of this seed capital can take place over time as the combination Britain’s financial obligations to the EU unwinds.

This could then become a joint UK/EU-financed fund with further funding from the UK and the EU and its institutions like the European Investment Bank. The fund would not substitute for spending in Northern Ireland by London but would have the long-term aims of increasing socio-cultural harmony, human development and the economic potential of Northern Ireland’s economy.

Another interesting source of funding is the growing appetite in capital markets for social-impact investment opportunities. This potential supply of funding is not yet met with a large, coherent supply of impact investment projects, partly because this kind of investing is not yet well understood and partly because it is difficult to create large-scale projects here. Northern Ireland could be a model for doing social-impact investing in a meaningful way.

The really interesting part of the proposal is that neither London, Dublin, Brussels or even Washington would be involved in planning and running such a programme. This would be done by a group of small, advanced economies – the likes of Sweden, Singapore and Switzerland.

This approach would have political and economic attractions. The first is that few if any of these small, advanced countries has political “baggage” with respect to Northern Ireland and would be therefore less likely to fall foul of the distrust that bedevils politics in the North (for example, the advice of New Zealand technocrats might be easier to take, and more credible than policies crafted in London or Washington).

Secondly, and more tellingly, small advanced countries are the source of the secret sauce of economic, social and human development. They tend to dominate the league tables of socio-economic success, from “most globalised” to “most innovative nation” or most “prosperous nation”. Indeed, the small advanced country model is acknowledged in Northern Ireland’s “Economy 2030” plan.

A few examples of what a small state-led fund might tangibly focus on include the kind of skill-based apprentice schemes found in Austria and Switzerland, rezoning of housing from deeply politically entrenched areas using the social-impact-investing model found in Belgium, investment in cultural projects that are common to all communities (such as is done in Scandinavia and Switzerland), and the establishment of poles of excellence in certain professions, such as legal financial services.

Such a fund might draw on the expertise and governance capabilities of small states. This might well add energy and transparency to policy decisions and the employment of detailed rolling five-year plans might help speed up what is at times a sclerotic policy process.

Given the frequent and urgent manner in which parties to the Brexit process annunciate the risks to Northern Ireland in general and the peace process in particular, it is time they do something to set it on a positive course. It is also high time that Brexit produces at least one good news story.

1 Covid-19 restrictions: Government prepares move to Level 5 for six weeks
2 Life under Level 5: What it would look like for the country
3 Life under Level 4: What will be closed under tighter restrictions?
4 Doctors’ letter calls for new strategy to ‘co-exist’ with Covid-19
5 Dr Muiris Houston: ‘For me, the most shocking Covid-19 statistic of all is this…’
Real news has value SUBSCRIBE