Election 2020: ‘There are more conversations about the election. People want change’ 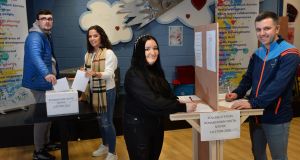 Rebecca O’Reilly (22) will “definitely be voting” on Saturday “for Gino [Kenny, of People Before Profit] and Mark [Ward] of Sinn Féin”. She is sitting in Ronanstown Youth Service in Neilstown, west Dublin with friends.

All will be giving their first preferences to these two candidates – both sitting TDs and both from the area, Dublin Mid West.

“Our voices, in this community, never mattered to most TDs,” says David Doyle (30) a youth worker. “But the likes of Gino and Mark, we see them in the community.”

“They come into the centre and they talk to people and raise our issues in the Dáil and that gives us hope,” adds Rebecca, a healthcare student.

Just going to the southside, as soon as go across that Ha’penny Bridge you get the eyes on you, being judged. You don’t feel welcome

This is north Clondalkin. It remains one of the most disadvantaged areas in the State but has experienced a transformation in voter activity over the past five general elections – a transformation it looks set to consolidate on Saturday.

When The Irish Times visited before the May 2002 general election it had one of the lowest, if not the lowest, voter turnouts in the State – at 37.3 per compared with 52 per cent in the constituency and 62 per cent nationally. The local data was compiled by political geographer at Maynooth University Dr Adrian Kavanagh,

Gus Reilly, then 52, from Harelawn told The Irish Times: “Look, no matter what you or I say they have their own ideas about how to do things. And the kind of people who would represent me wouldn’t get in. So, I ask you again, what’s the point [in voting]?”

Striking was the almost complete absence of political posters and, according to locals, canvassers in the area. Some did not know an election was imminent and the one woman who planned to vote had chosen Fianna Fáil as “the best of a bad bunch”.

While it is difficult to predict whether this will further increase on Saturday, says William Durkan lecturer political geography at Maynooth University, “It is probably fair to say the opinion polls point to Sinn Féin mobilising a ‘dormant vote’.”

“Certain demographics that are not mobilised, when an individual or organisation comes in, organises and works on the ground, and appeals to that demographic’s interests . . that dormant vote is [then] mobilised,” says Durkan.

This has been happening incrementally in areas such as north Clondlakin. He cites the 2015/16 anti-water charges campaign, which saw significant engagement from people in the area, as among the factors increasing political engagement.

David Doyle noticed greater interest in this election than in previous ones and certainly more than in last year’s local elections. “They want change. They’re excited for change.”

Sinead Harris, manager of the centre, has been encouraging young people to register. A “polling booth” has been set up in the centre where people can come in and practise voting.

“There has been a lot of interest. There are definitely more conversations about the election. People coming in asking how to vote. People are fed up and want change.”

Outside, around the Neilstown shops a man in his 70s says he has always voted Fianna Fáil, but will vote Sinn Féin this time.

A woman in her 60s laughs: “I voted Fianna Fáil before but I think it’s time to give the others a chance. They couldn’t do any worse.”

In the north inner-city, in the Dublin Central constituency, the mood is similar. This constituency had the lowest turnout – 52 per cent – in 2016. In one district – Rotunda B, just north of Parnell Square, it was just 35.87 per cent.

Dillon Kinsella (19), from the East Wall, says “a lot of people feel disconnected from Government. I’m only 19 and I feel a disconnection. Who in that Dáil really cares about people from around here?

“If you are from around here you feel the disconnection from when you go to school. The schools are great but if you have a lot of problems going on at home – and lots of kids around here do – how can you expect them to concentrate? They can’t relate.”

His friend, who doesn’t want to be named, says young people “can’t even put your address on a CVs or it will be thrown out” adding: “Just going to the southside, as soon as go across that Ha’penny Bridge you get the eyes on you, being judged. You don’t feel welcome”.

Dillon’s parents don’t vote but he is registered and will vote for the Sinn Féin candidate.

“Mary Lou McDonald. She is just brilliant. I feel a connect there. I am listening to what Sinn Féin is saying because they are talking about people. They want to lower taxes for people on less than €30,000 and increase them for richer. That’s fair in my opinion.

“When I was growing up you could really see the effects of the cuts on your parents. There’s anger. The country is in good state now. Why shouldn’t that be spent on services?”

Maria Mullen, a youth worker in the area, has been involved in the local

voter-registration drive. “Over the past few years I have found it virtually impossible to get people to register, but this year people have been in getting the forms, asking questions. People want to vote. There is a different mood. You can feel it on the ground.”