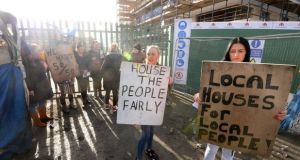 A housing charity may have to “walk away” from delivery of 65 social homes in west Dublin unless a protest which has halted construction work for more than three weeks is lifted “in the very near future”.

Clúid said there were “no winners” in the ongoing impasse where a group of about 50 people, calling themselves “House the Irish first”, have mounted a 24-hour picket at the entrance to the site on Ladyswell Road in Mulhuddart.

The protest began in mid-January and work stopped a few days later.

A Clúid spokesman said the possibility of seeking a court injunction against the protest was being explored.

“Construction started onsite in November 2018 and was due to be completed in August of this year. It is not now known when construction will be completed,” he said.

“There is a risk this project may never be completed if the contractor cannot get back onsite in the very near future.”

Concerns have been raised by activists and other residents about the anti-immigrant tone of the protest, the group’s Facebook page and the influence of far-right activists who support the action.

Mulhuddart resident Adrieanne McDermott, whose family has been served with a notice to quit the home they have rented for more than 10 years, understands the frustration of the women protesting.

“Of course people are desperate and of course there should be transparency about the housing list, but they are going about it the wrong way. They are blaming the wrong people, hurting their own neighbours and dividing local residents on ethnic lines.”

The protestors insist they are not racist but angry at the impact of the housing crisis on the local community. They want half the homes allocated to local households on the Fingal County Council housing list with the remainder open to the wider council list.

The site will comprise two-, three- and four-bed houses as well as one-, two- and three-bed apartments, 22 of which are described as “age-friendly”. On completion they will be allocated to households on the housing list by the council.

Some of the leading protestors met Clúid representatives on Friday at which the urgency of resuming work onsite was stressed.

A meeting with council officials on Monday was described by one of the main organisers, Alice Woods, as having gone “well enough”. The “protest continues”, she added.

A council spokeswoman said: “Officials met with a number of applicants for social housing from the Mulhuddart area this morning and updated them on their list positions based on the date on which they applied for housing support in accordance with the terms of the council’s allocations scheme. Information in relation to the provisions of the Housing Assistance Payment scheme [HAP] was also provided.”

Asked about her reaction to the possibility of Clúid not completing the homes, Ms Woods said: “That would be awful. We don’t want the houses not be built. We just want them going to local girls first.”

She said they hoped to meet councillors in coming days.

There are 6,959 applicants on the council’s housing list who indicate a preference for the Dublin 15 area, according to the council.