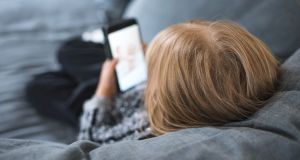 There is evidence that girls who receive mobile phones earlier fare less well in terms of their behavioural adjustment and their academic self-concept. Photograph: iStock.

Girls who receive mobile phones earlier fare “less well” in terms of their behavioural adjustment and their academic self-concept, according to research from the Economic and Social Research Institute (ESRI).

Authors Seraphim Dempsey, Sean Lyons and Selina McCoy examined data of over 8,500 nine year olds from the Growing Up in Ireland study and looked at how children with longer or shorter periods of mobile phone ownership score in terms of their wellbeing.

The children were first surveyed in 2007/08 and then again in 2011/12 at the age of 13. Forty per cent of children stated that they owned a mobile phone aged nine.

The analysis focused on the “self-concept” scale, which captures how children feel about themselves in areas like physical appearance, anxiety, behaviour, happiness and popularity. They also examined a questionnaire which measured psychological adjustment as reported by parents for each child.

Overall, the authors found that in terms of self-concept and psychological adjustment, there was no relationship between early mobile phone ownership and children’s socio-emotional development.

“However, there is evidence that girls who receive mobile phones earlier fare less well in terms of their behavioural adjustment and their academic self-concept,” they said.

“These findings suggest that girls may be aware of a negative impact of mobile phone usage on their cognitive skills development, but boys are not. It may also reflect the differences in the way in which girls and boys use mobile phones, and a potentially more detrimental impact of excessive or problematic mobile phone use on girls’ wellbeing.”

The ESRI said the challenge for policymakers and society more generally is how to maximise the potential of digital technologies for education and other purposes, while “mitigating any negative effects from access”, particularly for children.