A Jesuit who left the Catholic priesthood to marry, he was then drawn to Orthodoxy 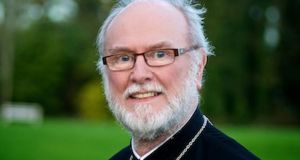 The late Fr Godfrey O’Donnell (80) was ordained a Romanian Orthodox priest in February 2004 by His Eminence the Metropolitan Iosif.

The funeral Mass of Fr Godfrey O’Donnell (80) the only Irishman to be ordained a priest of the Romanian Orthodox Church in Ireland, took place on Monday at St Columba’s Church, Blakestown Way, in West Dublin. A total of 28 Romanian Orthodox priests from Europe and Ireland took part in the Mass.

From Derry, Fr O’Donnell died peacefully at his home in Swords last Friday. A Jesuit priest for 28 years, Fr Godfrey left the Catholic priesthood to marry Ruth in 1985, but had grown increasingly drawn to the Orthodox Church.

He was ordained a Romanian Orthodox priest in February 2004 by His Eminence the Metropolitan Iosif in a six-hour service at the chapel in Dublin’s Belvedere College.

As he explained at the 2004 ordination, “I had to make a choice to let go of my Catholic heritage and to embrace Orthodoxy. It has been a great gift this last four years. I have met so many extraordinary people, very gifted people, great Christians who have also had to give up a lot to come to a strange country like Ireland.”

Currently it is estimated there are 80,000 Romanians in Ireland.