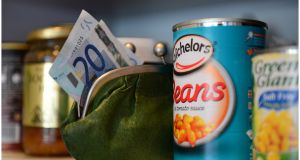 This CSO report finds consistent poverty to be higher for females than for males, and higher in rural than in urban areas. Photograph: Bryan O’Brien

Consistent poverty rates are highest in the southeast and Border regions while Dublin has the most housing insecurity, a landmark report published on Monday by the Central Statistics Office (CSO) has found.

The report, which highlights sharp regional variations in social progress, is the first in a series of 17 monitoring reports on progress meeting international development targets and pulls a range of data together on poverty, housing, environment and financial supports.

The targets under examination will be the 17 Sustainable Development Goals (SDG) agreed by the 193 member states of the United Nations in 2015.

Among the SDGs are that by 2030 there should be a planet with zero hunger, no poverty, clean water, gender equality, decent work and economic growth, clean energy and reduced inequality. The goals are not legally binding but member states commit to take action and work towards them.

This CSO report, titled Ireland’s UN SDGs 2019: Report on Indicators for Goal 1 No Poverty, finds consistent poverty to be higher for females (6.2 per cent) than for males (5.1 per cent), and higher in rural (5.8 per cent) than in urban areas (5.5 per cent).

Young people under 18 were four times more likely to be in consistent poverty (7.7 per cent) than older people over 65 years (1.7 per cent).

The areas with the most consistent poverty are the southeast where the rate was 9.1 per cent in 2018, and the Border regions where it was 8.6 per cent.

Varying levels of old-age dependency are captured. While in Co Sligo 9.3 per cent of the adult population are in receipt of the State pension, the figure is just 6.1 per cent in Co Laois. The national rate is 9.1 per cent

Tenure security is highest among owner occupiers, says the CSO.

Nationally, 69 per cent of the adult population are in owner-occupied housing compared with 61 per cent of adults in Dublin.

In its SDG implementation plan for 2018-2020 the outgoing Government set out seven targets under the goal to end poverty everywhere. These include to, by 2030, “ensure that all men and women, in particular the poor and the vulnerable, have equal rights to economic resources, as well as access to basic services, ownership and control over land and other forms of property, inheritance, natural resources, appropriate new technology and financial services”.