A century of housing: How the State built Ireland’s homes 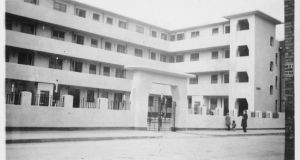 Herbert Simms, who was appointed by Dublin Corporation of the city’s first housing architect, is probably best known for the development of the city’s corporation flats, such as Chancery Place near the Four Courts. Photograph: G&T Crampton Archive

Few argue against the State having a role in the provision of social housing for those who do not have the means to house themselves.

But how deeply the State should involve itself in the provision of private housing is a question that has exercised successive governments for the better part of the past century.

The State’s involvement in housing those usually expected to house themselves has recently come back into focus. Details of a new affordable purchase scheme to help low- and middle-income workers get a foot on the property ladder is due to be issued within weeks.

By the early 1960s, almost 30 per cent of the cost of a standard suburban house could be recouped from government by the purchaser

There has also been the advent of the Land Development Agency to oversee the construction of private and social housing on public land; the existing help-to-buy tax rebate scheme, that lasts to the end of this year; and the future cost-rental scheme to provide homes to workers below market rates.

For the best part of a decade, since the last affordable housing schemes were discontinued in 2011, the Government has largely steered clear of the issue, with the financial burn they received when these at-first immensely popular schemes collapsed still smarting.

The Land Commission of the 1880s established a system of government loans to enable tenant farmers to buy their homes from their former landlords, and to build new homes. The scheme became the focus of the economic war with Britain in the 1930s when de Valera refused to honour repayments to the British.

It was eventually settled by a one-off €10 million payment, about 25 per cent of what the British considered owed to them.

The new State got stuck into the housing market straight away with the introduction in 1922 of the excitingly-named Million Pound Scheme. This enabled local authorities to construct 2,000 houses in just two years, most of which were sold to middle-income buyers.

When that fund was exhausted in 1924, grants and subsidies for private house purchase and construction took over, though local authorities continued to build some private houses directly.

These supports were available to individuals and to building cooperatives, called Public Utility Societies, and initially funded about one-sixth of the house-building costs. By the early 1960s, almost 30 per cent of the cost of a standard suburban house could be recouped from government by the purchaser.

Large-scale construction of social housing by local authorities didn’t really take off until the 1930s, when the incoming Fianna Fáil government put an emphasis on slum clearance, particularly in Dublin.

Their rise to power coincided with the appointment by Dublin Corporation of the city’s first housing architect, Herbert Simms, probably best known for the development of the city’s corporation flats, such as Chancery Place near the Four Courts, Pearse House on Townsend Street, and Marrowbone Lane off Cork Street.

But he is also responsible for large-scale suburban housing estates including most of Cabra and Crumlin, building 17,000 homes in Dublin in his tenure as housing architect from 1932 to 1948.

In 1945, the city architect Horace O’Rourke, who had been a buffer between Simms and the city’s administrative and political entities including church authorities, retired and his role was not replaced. This left Simms effectively occupying both positions.

While local authorities were still building social housing, they were not seen as having the ability to deliver on a large scale

In 1948 a new government announced it was going to ramp-up housing production. The same year, aged 50, Simms took his own life, leaving a note indicating he felt overworked and overwhelmed.

Simms-designed social housing developments continued to be built right through the 1950s and were replicated by other local authorities.

Two-thirds of all council housing ever built is now privately owned, with Simms houses the most likely to be in private hands. The discounts meant the proceeds of the sales could not fund the construction of new housing.

Many in the social housing sector see this as one of the greatest errors ever made by the State in relation to housing. Simon Brooke, director of policy with Clúid, the State’s largest housing association, describes it as “selling off the family silver”.

Others, though, including Dublin City Council’s head of housing Brendan Kenny, say it has had a positive and improving influence in areas with a high concentration of social housing.

The next wave of mass social housing construction came in the 1960s, precipitated by tragedy and panic about the conditions of inner city living.

Slum clearance was pushed up the Government agenda, when in the summer of 1963 three tenement houses collapsed in separate parts of Dublin killing residents.

This led to a clamour for new safe suburban homes, and resulted in the construction of Ballymun under the auspices of the newly established National Building Agency (NBA).

In the 1990s, the State again intervened in subsidising house buyers, through the introduction of the shared ownership scheme

While local authorities were still building social housing, they were not seen as having the ability to deliver on a large scale. The NBA was established as a semi-state body to build big, and fast.

The problem was it lacked a figure such as Simms who was obsessed with build quality and detail and ensuring that services, such as shops and playgrounds, were provided as well as homes. Such amenities were promised in the estates built by the NBA in the 1960s and 1970s, but did not always materialise.

In the rush to get people into new homes, housing complexes in Britain, where families were generally considerably smaller, were used as a template.

“It did a lot of the problematic social housing estates,” Housing Agency chief executive John O’Connor says. “Because the focus was just on building housing, they made some big mistakes.”

The Land Development Agency (LDA), which was established last year and had its first official meeting last month, is the natural successor of the NBA, an overarching body which aims to develop housing on a large scale.

While the LDA plans to build a mix of private and social housing, unlike the NBA which built almost entirely for social housing tenants, there is still a danger the new agency could repeat mistakes of the past, O’Connor said.

“The NBA made mistakes. It repeated poor designs and caused a lot of problems. Similarly, the Land Development Agency could make the same kind of mistake if all the focus is on housing delivery, with no retail or other services”.

The NBA wound down in the 1980s with the general retrenchment of State construction of housing, private or public.

In the 1990s, the State again intervened in subsidising house buyers, through the introduction of the shared ownership scheme, a part buy/part rent scheme operated again by local authorities, who were providing mortgages to buyers who had been refused loans by banks.

With the crash, as in the private sector, people were unable to pay back their local authority mortgages, prompting Dublin City Council’s then-head of housing Dick Brady to question whether the council should be in the “mortgage business” due to the burden of arrears on the council’s balance sheet.

Then, at the end of the decade, came the affordable housing schemes, the last great wave of State intervention in the private housing market before the crash, until now.

This is the end of the series on housing