‘Death of one of our greatest sons’, says Catholic Primate Archbishop Eamon Martin 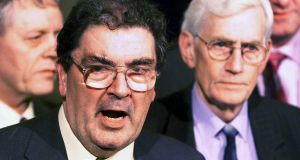 John Hume’s remains will be taken to St Eugene’s Cathedral in Derry on Tuesday evening at 5pm. Photograph:Alan Betson

John Hume’s remains will be taken to St Eugene’s Cathedral in Derry on Tuesday evening at 5pm. His funeral Mass, at 11.30am on Wednesday morning, will be celebrated by Cathedral Administrator Fr Paul Farren with the homily and final words by Bishop of Derry Donal McKeown.

Attendance will be in line with current Covid-19 restrictions with stictly limited numbers.

The Hume family said: “We realise this will mean that many will be unable to join us and we will arrange a memorial service and a celebration of his life in due course. Above all, we know that John would have prioritised public health, and the safety and health of our communities.”

In a tribute he said “a great sadness has descended on my home city of Derry today as we learn of the death of one of our greatest sons.” It “ripples out to every corner of Ireland and all around the world where the mere mention of the name of John Hume evokes admiration, respect and thanksgiving for a life dedicated to peace and social justice.

“Today we are remembering a paragon of peace, a giant of a statesman whose legacy of unstinting service to the common good is internationally acclaimed, even though it is still perhaps only unfolding,” he said.

“As a young person growing up in Derry I was hugely influenced by this man of principle. For me, like many other pupils of St Columb’s College, John Hume was considered one of our heroes and role models. When I went to study for the priesthood at Maynooth I was happy to know that he too had once been a seminarian for the Diocese of Derry.

“But John’s vocation was to serve God and his community as a layman, and he totally devoted his energies to that vocation - to relieving poverty, challenging injustice and providing decent living conditions for all,” the Archbishop said.

The man who built the peace

Paying to John Hume’s wife Pat he said she was “such a rock of support to John, and is an inspiration to all of us.”

Church of Ireland Primate Archbishop John McDowell said John Hume would be remembered “not only as a significant politician in Ireland but also for his unambiguous dedication to making political change happen by purely peaceful means.

“Because of the manner of his approach, this required enormous patience and sympathetic understanding and those of us who are the beneficiaries of his legacy can only regret his passing while, at the same time, being thankful for his gargantuan efforts in the cause of peace and good relations.”

Also paying tribute to Pat Hume, Archbishop McDowell said that “for many people, even looking on at a distance, Pat’s care for John, especially over the period of his last illness, was exemplary and inspiring.”

Church of Ireland Archbishop of Dublin, and former Bishop of the cross-border diocese of Clogher, Michael Jackson said that “during turbulent and troubled times, John Hume put his shoulder to the wheel in the service of dialogue and peace.”

His “legacy of painstaking dialogue is recognised internationally and was honoured in his lifetime by the joint award with Lord David Trimble of the Nobel Peace Prize. The fruit of his legacy remains the Good Friday -Belfast Agreement.”

The Archbishop said “we honour his memory, give thanks for his courage and pray for all members of his family.”

President ofthe Methodist Church Rev Dr Tom McKnight said that “there can be no denying the tremendous contribution and self-sacrifice of John Hume in the pursuit of peace in his beloved Ireland .”

As “a voice for progressive, non-violent nationalism, and his huge risk at great personal cost in reaching out to armed republicanism in the pursuit of a peaceful, democratic and prosperous future, John was a model of community spirit and a belief in the innate goodness of people,” Rev McKnight said.

“Coupled with his strong faith, John’s work and his dedication to the good of all – not just all who agreed with him – made him absolutely worthy of the many honours bestowed upon him by both nations and church,” he said.

He extended his sympathies “to Pat – who cared so deeply and diligently for John and for his work – and the entire extended family. John’s work will never be forgotten.”

Presbyterian Moderator Rev Dr David Bruce, described John Hume as “a man who selflessly committed himself to challenging the deep-seated problems of our society. He demonstrated a genuine desire to bring people together for the common good and to build a just and peaceful society. We give thanks for peacemakers, and on this sad day, John Hume in particular.”

He recalled how, on receiving the Nobel Peace Prize in 1998 with David Trimble, John Hume “reflected on the previous 30 years of his political involvement saying, ‘Amid shattered lives, a quiet heroism has borne silent rebuke to the evil that violence represents, to the carnage and waste of violence, to its ultimate futility.’ It is perhaps John Hume’s own personal courage, along with his consistent and outright rejection of violence, which we honour and remember today.”