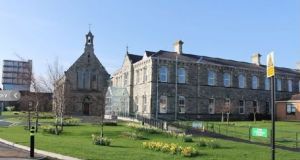 St Mary’s Centre Nursing Home is one of two Sisters of Charity nursing homes in Dublin unable to pay redundancy to its staff.

Funds are not available to pay staff statutory redundancy at two Sisters of Charity nursing homes in Dublin which are being closed, the congregation has said.

It was “extremely disappointed to learn that there may not be enough funds to pay statutory redundancy to the staff” at St Mary’s Centre Nursing Home on Merrion Road and St Monica’s at Belvedere Place in the city centre, the order said.

Meanwhile, elderly residents are now being moved out. In a statement to The Irish Times, the sisters said they were “aware that the board of directors of St Monica’s and St Mary’s [Telford] have had to make very difficult decisions to close the nursing homes and are in the process of making arrangements to ensure a smooth, timely and safe transition for all the residents to other facilities”.

A third Sisters of Charity home, the Caritas Convalescent Centre on Merrion Road, is also being closed. On July 9th the High Court appointed joint provisional liquidators to the company operating the centre, which has 54 beds and employs 65 people.

On the previous day, July 8th, it was announced that St Monica’s, with a capacity for 46 residents and more than 60 employees, was to close. Last Friday directors at St Mary’s Centre applied for a High Court order to enter voluntary liquidation. It has 35 female residents, whose families were informed in June it would close by the end of the year.

In court proceedings on July 9th it was disclosed that the Caritas Centre was closed as a result of the Covid-19 pandemic. Decisions to close St Monica’s and St Mary’s followed critical inspection reports from healthcare watchdog, the Health Information and Quality Authority (Hiqa), over recent years.

The HSE, however, has expressed surprise over developments at St Mary’s in particular. A spokeswoman said it was involved in discussions around “financial and infrastructural challenges at St Mary’s” when the centre announced it would close.

She said further meetings “were planned when the HSE became aware that the board of management of St Mary’s were intent on closing the nursing home element of the service”.

It was the case too that “no formal request for additional revenue funding was received [from St Mary’s], albeit a proposed capital investment plan of circa €1.3 million was received as an estimate to upgrade one element of the service on site”, she said.

The HSE had advised the board of St Mary’s “that it was willing to engage jointly with Hiqa to review the specific nature of the plan and potential timeframe for such an investment”. It was also evident to the HSE that St Mary’s had access to restricted funds of €600,000 which “would contribute to the overall costs of the project”, she said.

In their statement, the Sisters of Charity said the decision to close the homes followed “a detailed review of their financial resources and the lack of financial funds required to bring each premises up to the standards required by Hiqa”.

The Caritas Centre was closed “because of Covid-19 and when the HSE informed them they could reopen, it was on the basis of 30 beds instead of 52 which would make it financially unviable”.

They also pointed out that all three homes were “separate and independent corporate entities from the RSC [Religious Sisters of Charity]”. Caritas was set up in 2001, St Monica’s set up in 2003, and St Mary’s in 2007.